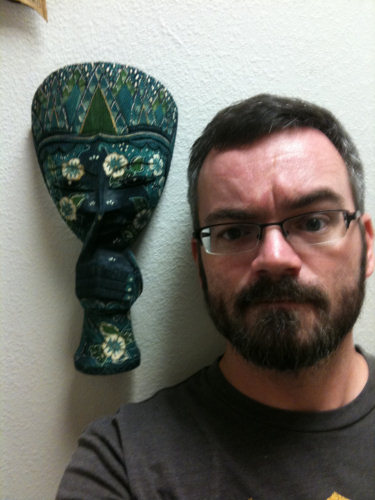 cb tweeted me that this morning. I’m fairly certain that’s the look that went across my face when I read it, when I was still dealing with one of the Husbear’s salon computers that is being evil. And not a good evil like me.

The Muses didn’t show up with me at the tattoo studio today. I have commissioned work I need to do, but just couldn’t feel the rhythm.

So instead, I finally managed to transfer all my pre-blogging pseudo-blog entries over from our old, static website. If you’re really, really, really bored, you can read the somewhat dry ancient Erik history by checking out the tag archived-from-robertanderik-com.

It might be a good thing if you’re having trouble drifting off to sleep.

Two more months have passed since I last blogged about the remodel that started in February with “The Great Leak” and snowballed from there.

Since that last post in July, the roof has finally been completed, and we have since installed the windows.

Then came a little “time off” with our trip to New Orleans for Southern Decadence. Now that we have finally recovered from that trip, it was time for us to get back to the business of the remodel.

We had the HardiPlank fiber cement siding delivered way-too-damned-early Sunday morning. We started putting it up this morning. Here’s the result of what we were able to get installed today, er yesterday (Monday).

That stuff is freaking heavy. I can barely lift my arms now to type.

And believe it or not, the new master bathroom is not the only project we’ve got going on around the house. There’s the whole back deck we’ve been working on, and we’re also replacing the existing covered front porch that was on the house with a larger, columned front porch similar to Antebellum architecture in the Greek Revival style.

Here is what the porch looked like when we purchased the house in 2002.

We took the tin roof off in either 2007 or 2008, with plans on starting the new porch at that time. But due to some other issues, that project was put on hold. Since then, we have also decided to remove the wooden front porch and replace it in it’s entirety with a concrete front porch.

We’ve poured all that concrete by hand, in stages. The Husbear’s concrete mixer has definitely seen better days.

It’ll be nice to get the columns installed and the new porch roof built. One of these days…. 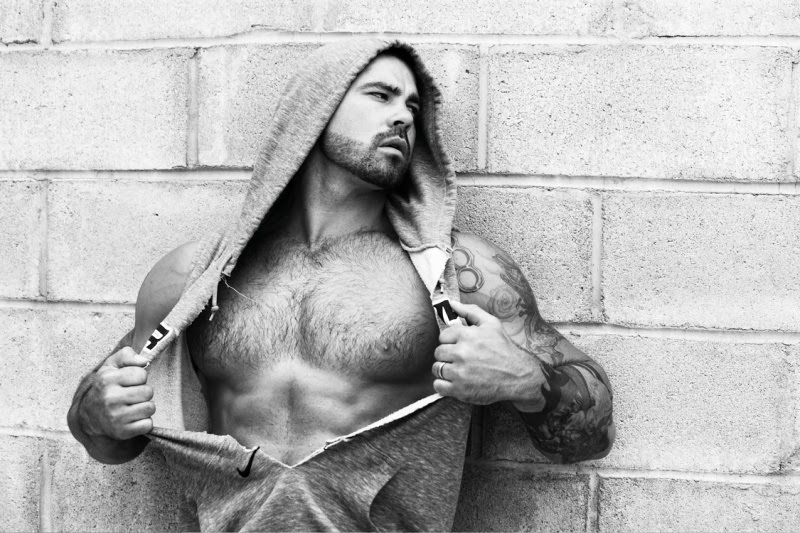 For some odd reason I was expecting a big “S” to be tattooed on his chest.

When did you know you wanted to be a tattoo artist?

Only about 5 years ago, actually. And it was more because of something that resulted as a question from someone to me along the lines of “Why aren’t you a tattooist?” rather than a “Hey, I want to be a tattooist when I grow up!” sort of thing.

Time for an Erik history lesson.

I used to do a lot of art-related stuffs when I was younger, but it was more a creative hobby than something I thought anyone could ever make money to live. I would build extremely detailed plastic models; oil painting; pen and ink drawing; modeling and firing clay; random collages made from all sorts of stuffs; photography; and all sorts of other bizarre stuff that one might attribute to “art”.

My parents my art talents, but only as a hobby and not something I should do as a career. So when it came time for college, I put my art stuff aside. I ended up with a BA in Social Science and was going to teach History to high school students. After I graduated, I realized I no longer wanted to be in school. I eventually ended up in the computer field.

I left the computer field the first time to help the Husbear run the hair and tanning salon we had opened. When we could finally afford to hire employees, I went to school to become a massage therapist. After getting my license, I did that for about a year before I became completely bored with it. Mind numbing for me it was.

So I went back into the computer field. In that time, I had started getting more tattoo work done (after nearly 10 years since my first one!). People who knew me knew I was artistic. It took someone asking me why I wasn’t a tattooist before I got the notion to do it.

So I looked into what it would take in the great state of Arkansas to become a tattooist. The main route involved apprenticing under a tattooist at a shop, which required a whole lot of money to do. (Shops at that time were charging roughly $10,000 to apprentice, and all your tattoo income went to the shop. And no guarantee that you would be allowed to complete your apprenticeship!) So I went a different route: With the help of the [She Who Shall Not Be Named, At Her Request], I opened up a tattoo studio first. In exchange for her mastering me in the tattoo arts, I would give her free booth rent for a duration.

I earned my license in June 2006. I tattooed part-time in the evenings after my 45+ hours-a-week day job, and on the weekends. That got… old. So finally in June 2009, I left the security of my computer gig to tattoo full-time, and I haven’t looked back since.

I love it. I get to meet the full gamut of the population, AND they pay me to inflict pain on them! And I get to create art. Permanent art. 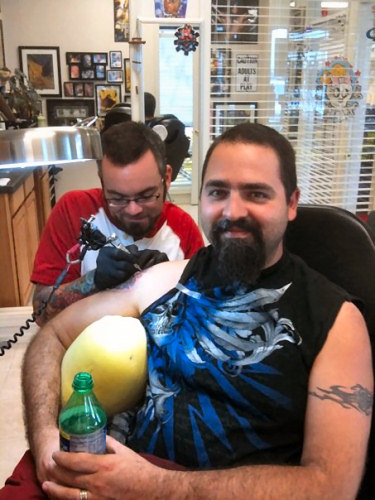 Me at work, which really isn’t “work”, tattooing Joseph.

Go ahead, make my moment. Ask me a question. I’ll do my best to answer it. Don’t be bashful. 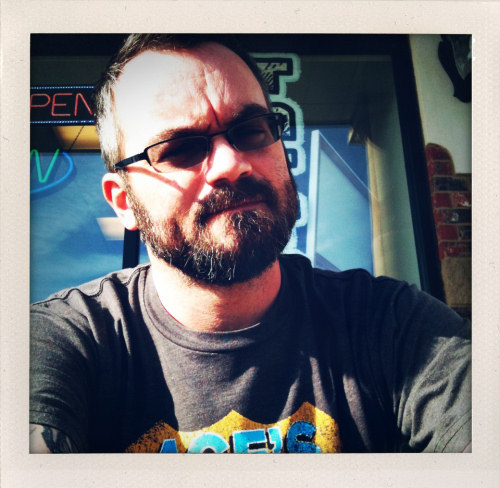