The Husbear attempted to “surprise” me with having my best friends over for dinner and a celebration. Which somewhat succeeded. In the surprise part. In the way I didn’t know about it. 😉

But I blew out the candles regardless.

I had a great evening with my besties: Mike, Dwayne, MAG, GypsyBiscuit, the Husbear, our oldest daughter and her husband.

Much food and alcohol was had. And then some Cards Against Humanity as well…

I received the most excellent present ever. Ever.

Seriously. The best present ever!!!!

I love my besties. So very much. And I’m glad they took time out of their schedules to come spend some time with me.

And now I’m drunk. Because alcohol was gifted and drank.

Tomorrow shall be interesting….

Sunday, MAG had to leave to prepare for his week at work, and the Husbear had to leave to take the housemate Interloper home so he could get to work. Which left The Beveraging Four.

We has a nice relaxing afternoon and evening. Sitting around the campfire and talking in between moments of staring at the fire as it did it’s ethereal dance.

Monday morning came, and we broke camp sometime around 10 and began the drive home.

I had a great time. The first time I had been camping in twenty years. I am looking forward to our next camping trip!

I leave you with a random assortment of pictures I had taken.

Saturday morning we got up and had breakfast. Then it was time for a hike that MAG had roughly sketched out on the good old topo map. Dwayne stayed behind in camp and watched our stuff, while the rest of us journeyed over the river and through the woods. Quite literally in this case.

And then it was time to cross the river. No bridge. No jumping from rock to rock. Just plain old wading across. Which went quite well for MAG, the housemate Interloper, and the Husbear. But GypsyBiscuit, Mike, and I were a little stubborn and looking for a different route. Which ended… with wetness.

Since we were wet, we dried in the sun and had a little lunch.

And then it was back on to hiking.

Along the hike, we came across the great Wall. In the middle of the collective no-where. Seriously. And there just wasn’t one wall. There were several. Someone or someones at some point in the past took a lot of time and effort to build these mammoth walls in the middle of no-where. For what reason?

First, here’s a video I took:

So far, we have yet to find any information about them. These are along Hart Creek. And we think possibly they had something to do with the settlement of Anna that is no longer near there. But other than that, we have nothing.

And then as mysteriously as it started, the wall just stopped. Hopefully we’ll be able to find out a little more information about it.

We made it back to the river. To cross back over.

Then back to the camp we headed. Where I saw this.

Which was incredibly funny, because the entire weekend I had been humming the theme to “Jurassic Park”. Much to the annoyance of everyone around me, I’m sure. 😉

We had a great dinner and remainder of the evening around the campfire.

Late that night, there were moments of stupid from another set of campers that involved alcohol and guns which had us on edge until the situation was diffused. Thank you MAG for taking care of us!

This past weekend I did several things I haven’t done in a long, long time.

The first was something I haven’t done in 22 years: I went camping!

I think the last time I stepped foot in a tent was in 1991 when I worked at a Boy Scout summer camp in North Carolina. It’s definitely been a long time.

This camping trip came about as a result of the Monday Beveraging gang—The Fabulous GypsyBiscuit, Mike, Dwayne, and myself—somehow deciding while out beveraging one Monday that we should all go camping. Decisions like that tend to be made when beveraging is involved. 😉

Plans were made about a month ago to get the trip scheduled, as some of us have to really, really plan our calendars in advance since we work weekends. We figured late April would be a nice Spring weekend on which to take our camping adventure, since typical temperatures around this time consist of highs around 73° and lows around 47°.

We were a little wrong:

The day before our adventure was to begin, a storm system brought in a massive cold front. And with it enough rain that it washed out our driveway beyond basic repair and brought some water in to part of our home. (I skipped writing about that, mostly because there wasn’t time.) Because of that storm system, the high on Friday would be only 55 and the low would be right around freezing. Erik doesn’t like the cold, let alone having to be outside in it and sleep in it! This would be a mental challenge for me.

But we pressed on.

GypsyBiscuit, Mike, and Dwayne all headed out early Friday to secure and set up our camping location in the Ozark National Forest, southwest of Devil’s Den State Park. Then later but still early in the afternoon, GypsyBiscuit’s husband MAG, the Husbear, the housemate Interloper, and myself all headed down to meet them.

The campsite was in a gorgeous location: Fall Creek babbled down below us; bluffs to one side; a large hill to the other; trees everywhere in between.

The Husbear and I set up our tent, which we purchased for this trip as we didn’t have one. Actually, I had one at some point, but it’s been lost in the shuffle of moves we have made over the years. Hopefully the purchase of this will result in more camping trips. But this tent is huge. I think an entire small country could easily fit inside of it.

After that, we wandered around and explored the area for a bit.

We then settled down to some dinner and beverages around the campfire. The Husbear spent a lot of time dragging trees down from the surrounding area and chopping wood to keep the fires burning. Something he seems to have a knack for. And I’m grateful for. It kept us warm in the freezing temperatures.

We eventually all made our way to our respective beds, where we attempted to not freeze during the night. Lucky for me the Husbear grew up in a cold environment. He brought hot rocks from around the fire into the tent to help keep us warm through the night. Well, at least the first part of it until the rocks cooled. But he kept me warm. 😉

And before I forget, this lovely piece of art was found in the wood:

The second thing I hadn’t done in a while was to totally unplug from the network. I really didn’t have a choice in this case. Where we went camping there was absolutely zero cellular coverage. Meaning the Husbear and I also had to unplug from our businesses. If there was an issue or question, there was no way we could be reached. Period.

That was a difficult thing to do. Or let go of. But sometimes one has to be forced into such things.

It also meant I couldn’t blog. Which means you’re getting this post after I’ve returned home….

We are finally home after being gone for 12 days. Or 13. I’m never good with calculating that.

I would have to say this was the worst trip—and week and a half—of my life ever: speeding ticket, death of a best friend, having to call friends to tell them of said death, cracked windshield, riding out a hurricane, explaining what happened over and over again to different people as they asked who hadn’t heard of said friend’s death, waiting on friend’s body to return home from hurricane land, funeral, funeral aftermath.

There’s too much rolling around in my head right now, and some of that I’m trying to get down in different posts.

I’m sure eventually I’ll get back to my happy blogging self, but in all honesty right now I’m not in the mood.

I’ve got a lot of comments to reply to. And bloggers to catch up with. This may take me a while. 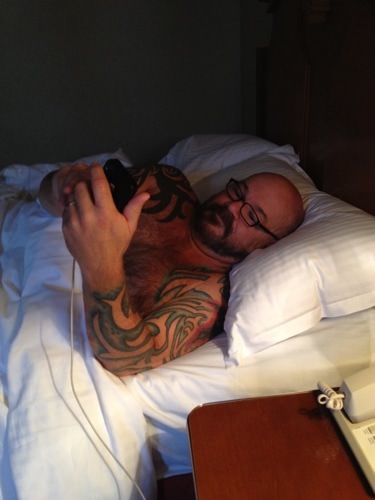