Monday night the Husbear and I, and a gaggle of the girls from the Husbear’s salon went to Tulsa to see Lady Gaga in concert.

This was my first “real” concert since 1992. I really wasn’t sure what to expect. Nor did I know how to dress. All the girls from the salon went all out and crazy. I felt like an ol’ fuddy-duddy as I had know idea what to wear. Thanks to a moment of serendipity I just happened to read Sean of Idle Eyes and a Dormy‘s latest posts on his art showing, and I loved what he wore! And I just happened to have that same style clothing in my closet! So a big thank you to Sean for the fashion inspiration: 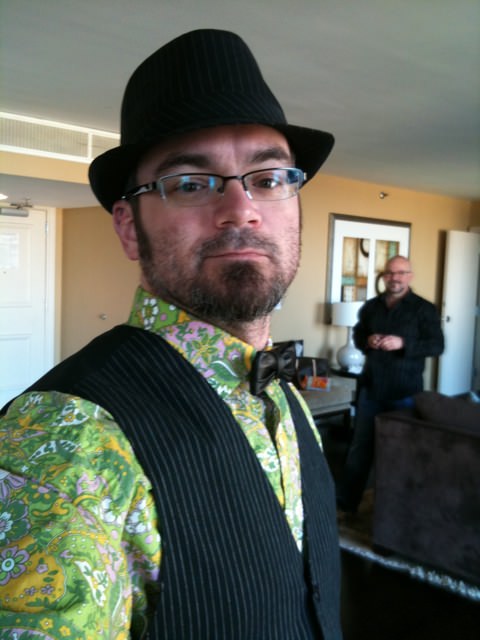 I really like that picture for some reason. It’s kinda “artsy” feeling… with the Husbear in the background.

And here’s a picture of the whole group: 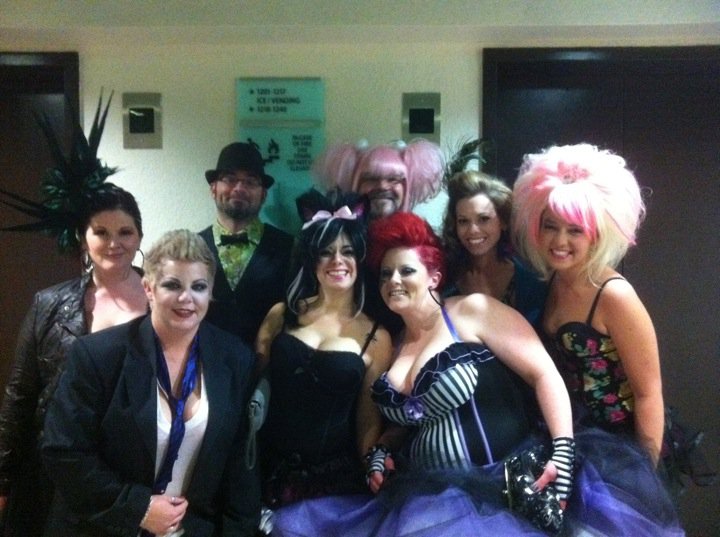 When the concert was first announced, the Scissor Sisters were supposed to be the opening act. I was thrilled because I would have rather seen them in concert than Lady Gaga. But a few weeks ago they went on their own concert tour and are no longer opening for Gaga. Sad face.

Sadly, some band from New York called “Semi Precious Weapons” opened. The lead singer reminded me of the guy from Dead Or Alive. And, in my opinion, they were horrible. They’re sound reminded me of the back-alley sounds of cats being strung up at a Vietnamese restaurant with an accompaniment of people who learned to play musical instruments by playing Rock Band. Luckily they only played a few songs and then left the stage.

At which point we had a one hour wait until Lady Gaga started her show.

Her show was very well done. I’m not a fan, to be sure, but the concert was impressive to say the least. I’m familiar with most of her hits, thanks either to the Husbear, or to repeat play in the few clubs I’ve been to. I think there was maybe only three songs I didn’t recognize, and one was from her upcoming album which will be released at the end of May.

At every break she spoke of equality and the GLBT community, which I found extremely impressive.

She played for two hours, and did several encores. The final encore was her dance release of “Born This Way”. To hear the crowd singing along with her, it was incredible.

I do have to say I had a moment of mental weakness: About half-way through the show, Gaga started playing a piano solo which turned into a piano-only version of “Born This Way”. For some reason, I started blubbering like a baby. I don’t know why, as the actual song never really impressed me. Maybe the fact that I could actually “hear” the words of the song without thinking about how much the song sounded like a mashup of TLC and Madonna. Who knows.

It was a good show, and we had a good time.