I managed to fill this out between clients at the studio today. There’s some good stuff here. 😉

But first, a gratuitous picture of moi! 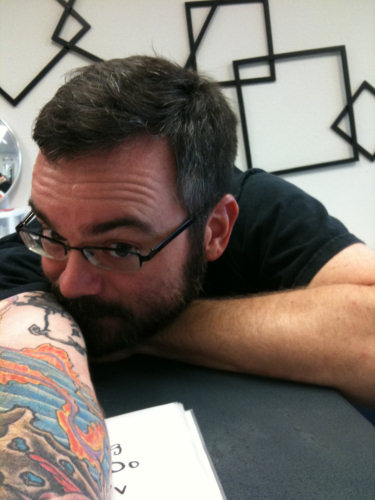 Do you get regular massages?
Not any more. I used to regularly, back when I was a licensed massage therapist over a decade ago. Wow. It’s been a while.

Do you have an answering machine?
No, but I guess the “modern” equivalent would be voice-mail, which I do have.

What cuss word do you use the most?
I don’t regularly cuss. At least externally.

Are you underweight or overweight?
Personally I think I am overweight. But if I could replace some of the fat I have around my tummy with muscle I’d be better.

Can you see your veins?
Yes. At least the ones that aren’t covered with tattoos.

Fruit?
Carambola. My mouth waters ever time I think about it.

Kind of red meat?
Human. Kidding. Or am I?

Eaten a whole bag of potato chips?
Yes. Bags of several sizes even.

Eaten lobster?
Twice. I didn’t like either variety I tried.

Climbed a mountain?
Yes. In high school I went to Mt. Dora (some of you might get that joke). But when I worked in North Carolina at BSA Camp Daniel Boone I did it regularly.

Been skydiving?
No. Why jump out of a perfectly good plane?

Been water skiing?
Once. It did not end well. And it’s not a horse I care to get back up on.

Wish you could change something about your life?
Well, duh. Really? Does anyone out there actually not have one little twinge of regret over something?

Like your nose?
It’s a nose. I’d like it if it was less pudgy, but oh well. I guess there’s always MJ’s plastic surgeon if I need it.

Own a boat?
No. If I want to waste money, I’ll just drink.

A small thing that people let slide but that actually has dire consequences?
Using their cellphones during the movies. One of these days that’s going to be bad for a lot of people when I finally go postal. I bet there’s an app for that.

Your most macho trait?
I never considered myself macho. At least my definition of “macho”.

Your most embarrassing thoughts?
Like I’m going to write them here. Then it wouldn’t be just me who was embarrassed.

Your most shameful moment?
I could write an entire blog post about that. Maybe I should.

Bath/Shower?
Shower. If I wanted to sit in dirty water, I’d go swim in a lake.

Markers/Crayons?
Both. I use them regularly.

Pens/Pencils?
I prefer pencils. I can erase my mistakes. Which is oddly ironic considering what I do for a living.

Jelly/Cream Cheese?
On what? Cream Cheese on celery is really good. Jelly not so much.

First credit card you had?
I finally got around to burning the paperwork for it a year ago or so. I don’t remember who it was with, but I got it in college. MISTAKE!

First loan you got was for?
A motorcycle. In college.

First paycheck was for how much?
I don’t remember. That was soooooo long ago.

First time you had stitches?
I was young. I fell off the stairs on the trailer we lived in as a kid and sliced my chin open.

First time you went to the hospital for something?
Probably the above related incident.

I have such a healthy diet, don’t I?

Last thing you used a credit card for?
I don’t currently have any active credit cards. It’s either cash or my debit card.

What was your job previous to the one you have now?
My resume says: “Advanced Systems Engineer, ISD Workstation Engineering. Wal-Mart Stores, Inc.” You can read the love here.

Last time you were at a sports bar?
This past Monday. My regular beveraging evening with my buddy, Mr. Farmer.

My greatest weakness is…
Crushing on men who end up being straight. Or bottoms.

I wish I was…
More testosterone-y. It really does affect everything.

The oddest thing I’ve ever put in my mouth is…
That answer to this question is soooooo relative to who is reading this, isn’t it? Does my fist count?

—
Stolen from YvesPaul at Melodramatic Diary of a Cynic.

9 thoughts on “Some Random Trivia About Me… Meme”