I’m still laughing after seeing this: 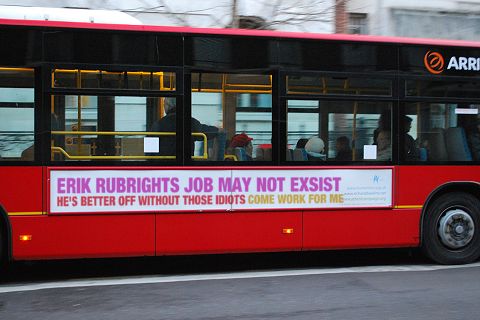 Thank you Dead Robot. That more than made my day. I think I shall make this my new desktop wallpaper at the Great Retail Empire.

I promised the AlphaForager a post (and those who saw my tweets) about events that occurred on Wednesday at the Great Retail Empire.

About 11:00 or so, I received a call from the head of our “People People” department asking if I would come visit around 1:30.

Great. The head of “People People” never just calls you up to visit, I thought.

I was expecting discussions around the content of my blog posts concerning the Great Retail Empire, as that was the only thing I could think of that I had “done” as of late that would possibly warrant said invitation. That, or someone forgot to lay me off and they wanted to know why I was still here, red Swingline stapler in hand.

So, around 1:30, after receiving well-wishes from those around me, I wandered off to the “People People” people.

It was said some individuals had complained about the content of my blog concerning certain recent events. The “People People” people stated they read my blog (which makes me giggle a little, as I wonder if the other content I post caused some brain throttling). Nothing was stated about the content of my blog itself in regard to the Great Retail Empire. I was called in because they were concerned with whether I was essentially mentally okay.

Discussions were had. (I stated I would not blog about said discussions so I won’t.)

Not to sound like I drank more of the Kool-Aid, but the discussions were probably the best visit I had ever had with anyone in the “People People” department. I don’t feel any better about the layoffs that happened. However, I was able to express myself, my feelings and my opinions to someone who would at least be able to do something with my statements, which is opposite how I feel about those in the corner office(s).

There was something I hadn’t blogged about that was also mentioned: my dislike of the word “processes”. So I know either my tweets or Facebook statuses (or both) were /are being read.

And I now know there are some people out there who I work with in some fashion reading my blog that can’t handle the truth. To them I say thank you for the extra ammunition.

I am assured that I am now on some sort of blog watch list. As is the term “Great Retail Empire”.

Maybe I should consider doing that “Men of the Great Retail Empire” photo shoot now.

(Updated, 02/27/2009: For the first time ever, I have disabled comments on a post. I do this only at the Husbear’s request. To my readers and those who already posted, please only know that he is sincerely afraid for me in the waters in which I am treading. If you want to discuss, email me. My contact info is here.)

5 thoughts on “Tagged by the Bus”