We had an impressive—wait, that’s not the correct adjective… let’s go with phenomenal—downpour Saturday night. So much so that water made it’s way into the back of our house.

We knew sooner or later this would happen. Our house is “perched” on a cut in the side of a ridge. All the water from town up above makes its way down the ridge when it rains. Normally not a problem, as nature has pretty darn good absorption rates. Unless you get 4 inches of water rather rapidly. Then nature just barfs all over you.

The water backed up behind the house and squeezed it’s way between the foundation and the sill plate, and threw up all over our floor.

After drying that mess, nothing appears to be ruined as far as we can see. Will re-check for mold a few weeks down the line.

But we did spend ALL DAY Sunday behind the house installing a French drain to channel water away from the house. Know all good gays should know what a French drain is (that landscaping gene, right?), but if you don’t know, a French drain

… is a ditch filled with gravel, rock that redirects surface and ground water away from an area. French drains are common drainage systems, primarily used to prevent ground and surface water from penetrating or damaging building foundations.

The first bit of fun was digging a trench next to the foundation. 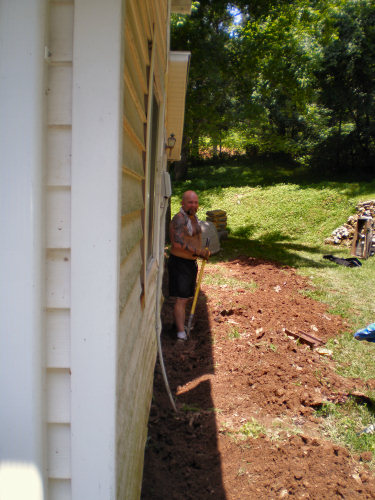 The Husbear in the trenches…

After the trench was dug, we laid landscape fabric down, then a 1″ layer of gravel, then the perforated drain pipe covered by more gravel. 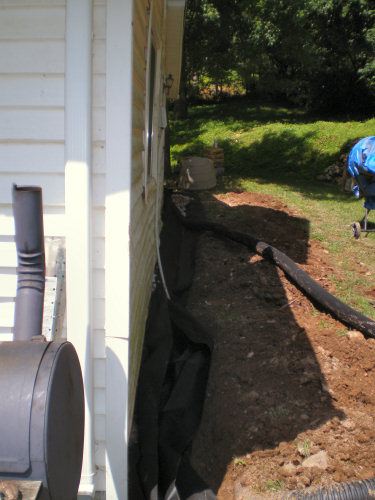 We got about half the drain installed before we called it quits Sunday evening.

The Husbear ended up overdoing it… seriously. So much so I was considering taking him to the hospital. He was acting as if he was drunk, and was extremely lethargic. It eventually passed, but I was definitely worried for a few hours. He’s a stubborn mule sometimes.

We are both worn out. And we still have about half the trench to fill with gravel. This is the difficult part, as we’re bringing gravel up from the bottom of the driveway that washed out and using it in the drain. Thank goodness for the little John Deere tractor. But it’s still a lot of work.

I’ll post a picture or two of it when we are done Monday or Tuesday before the next big rain. And then the Husbear wants to start pouring a concrete deck back there….

Oh, and here’s a picture of me with my big hose: 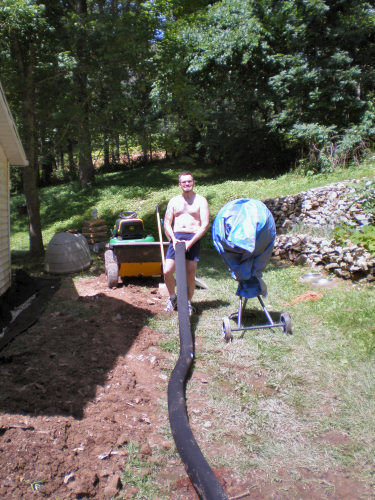 Get your mind out of the gutters. And I know—I need a tan….

10 thoughts on “When it rains”