Urspo asked what the worst tattoo I had ever seen was.

With websites like Ugliest Tattoos, LOLTATZ, and Hanzi Smatter showing all sorts of horrors, that is not a hard question to answer. Because of that, I will limit the scope of the question and say the worst one I’ve ever seen, in person. 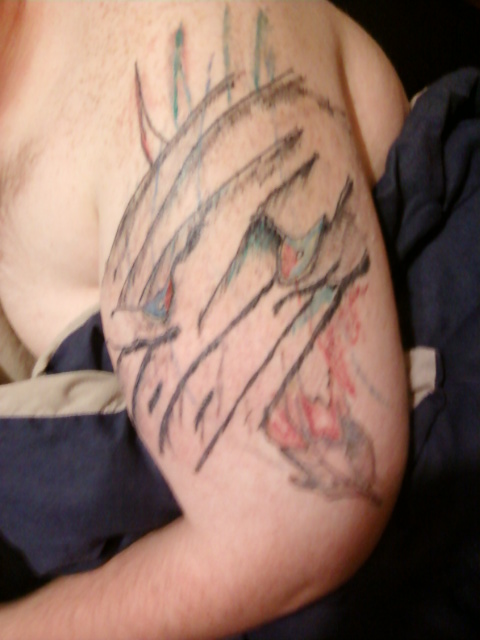 When [She Who Shall Not Be Named, At Her Request] and I originally saw the picture, we were hoping that was permanent marker. And then his mother brought him into the studio. Definitely not marker. But definitely permanent.

I still have no idea what it is, or what it was supposed to be. Even after hearing the explanation.

All I do know is that this is what happens when an 17-year-old wants a tattoo and a friend “knows somebody who has a tattoo gun”.

And by the way people, it’s a “tattoo machine”; not a “tattoo gun”!

Update:
I received this from the mother of the… victim.

OMG, Erik – that is the funniest thing EVER! – absolutely no apology required! just to set the story straight, he is 18 and it was his “graduation gift” from a friend that “used to work at a tattoo place”. and the design the way he explains it is it is supposed to depict someone in fear, that has not slept for days because they are afraid of Freddy coming to get them. “it’s a slasher thing”. he was supposed to get it “fixed” a couple of weeks ago, but the guy never showed up??? i still tell him he is an idiot, and you may feel free to quote me!