Saturday, a “friend” on Facebook posted a status update that he was jonesing for a tattoo. This is the “conversation” that followed: 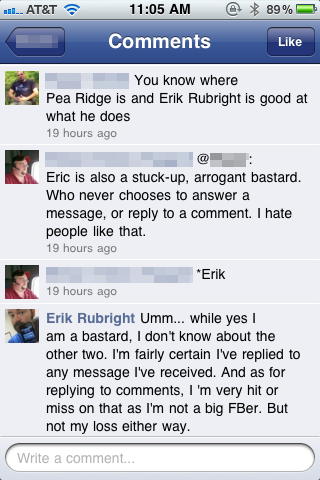 For some reason this really, really bothered me. Enough that I keep thinking about it. So I’m writing my thoughts down in an attempt to get it out of my head.

As for the bastard bit, that’s likely technically true since I am adopted. Although I know that’s not in the sense of what he meant.

But stuck-up and arrogant? I know I’m a lot of things, but I really don’t perceive myself to be either stuck-up or arrogant. I don’t know if those are qualities one would actually notice about oneself if they were. But I’m fairly certain the people who choose to be around me aren’t the type of people who would put up with either of those qualities in the people they surround themselves with.

Then there’s the whole “never chooses to answer a message, or reply to a comment” bit. Maybe that’s his beef with me, although I don’t know why it would make me stuck-up and arrogant. I do get around to answering my messages/emails, albeit at a slow pace some of the time. But I do reply to most emails. Eventually.

And as far as replying to Facebook comments, that’s a different story. If someone asks a direct question, I’ll comment, but other than that, I see Facebook as a message board. Not every comment needs a matching reply. If that was the case, I’d never get anything else done. Ever. And I’m not on Facebook 24×7 to see what’s going on with everyone all the time. So I can’t comment that I’m proud that you drove your truck and delivered your trailer full of stuff somewhere.

After thinking about this for the last 30+ hours, I unfriended the “friend” today. I told myself I wasn’t going to at first, but I don’t need that kind of crap in my life.