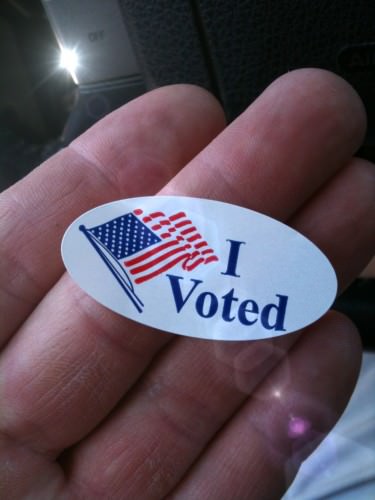 While I was at the polling place, I noticed everyone there was a geriatric, at best. One of the election officials even seemed “surprised” that a younger voter (i.e., me) was even there. That, or she was startled about my tattoos. I’m guessing probably a little of both.

Jim of Jim’s Stuff started his own version of the “Pic a Day in May” challenge. So I thought I’d go ahead and give it a shot. It’s not like I can really think of anything to blog about these days anyway. So we’ll go with my life in pictures. There’s that whole “a picture is worth a thousand words” thing anyway, so that just means I need to write less. 😉

Other bloggers that I know of who are playing along:
Jim of Jim’s Stuff
Sean of Idle Eyes and a Dormy
Kelly of Rambling along in life…
Sean of Just a Jeep Guy
BuddyBear of One Step at a Time