Started almost a year ago thanks to a post by Tom at My New Life, I just now got around to actually finishing this post.

1. When did you first notice having homosexual feelings?
I always remember being mentally drawn to as well as having a physical attraction/reaction to males. Even before I reached puberty. I didn’t know they were homosexual feelings at the time.

2. How and when did you come out to yourself?
I don’t know when—or if—I actually said to myself “Hey, you are gay, and you’re okay.” There was years and years of “knowing there was something wrong” about me thanks to a religious family upbringing and religious schooling telling me those differences were sinful and wrong and “those people” would burn in Hell. It was a long time of slowly chipping away at those deeply embedded teachings just for me to even start to comprehend that it was okay to be “different”. Years and years of self-hate and denial. It was/is a long, slow process to just accept myself. So I don’t know that I have a definite answer to this question.

3. How and when did you come out to others?
I am certain I outed myself unintentionally from time to time to others from comments I made, or the fact I had no social life. Or social life I discussed with others. I didn’t want to be around other males for fear of doing something stupid or getting caught. I really don’t remember the first time I actually came out to someone and said “I’m gay”, but one particular instance sticks in my head.

I had this picture of the Husbear and myself hanging on my pod wall at the Wal-Mart Home Office back in 1998. 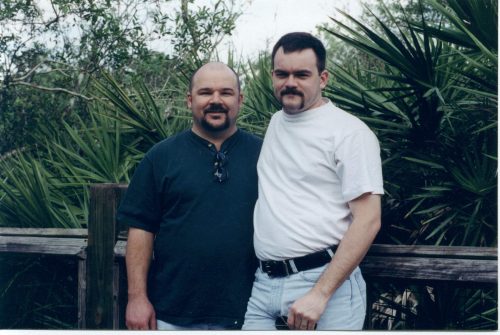 My Operations Manager saw it and either asked if it was my brother or who it was with me. I think I said it was “my partner”. “Business partner?” “Well, that too.” (They knew I ran a business outside of the job there.) Dawning comprehension washes across his face. “Ooohhh.”

But I’m sure there were others I told before that happened. I just don’t recall. I’m guessing though it involved a lot of “partner”, “friend”, or “housemate” talk though. It’s odd how we can forget these things after so long.

4. What were the first reactions you got from others?
I can say that I never had a bad reaction. Most people said it was no big deal at all; that I was still the same person.

5. Did their reactions change over time?
I don’t think my being gay changed anything. Although I tend to be a little naive about such things. I’m sure there are some people who wouldn’t hang around me in public for fear of other people thinking they might be gay too since they’re hanging out with me, but that’s their loss.

6. How did your family react?
The first person I told in my family was my oldest younger brother. Somewhere between 1999 and 2000, he came to visit me in Arkansas. I was scared as Hell to tell him. But he took it well.

Then came the non-biological parental units in 2001. Telling the parental units didn’t go so well. And still hasn’t to this day. I’m fairly certain my father has written me out of the will for that and several other reasons. And although I can’t explain why, I’m okay with that.

I also told my sister in writing at the same time as my parents. She’s never spoken of it since. Although she does ask about the Husbear when we talk, and she treats him well when we see her in person.

I’ve never told my youngest brother, but I’m sure the rest of the immediate family has done that for me.

7. How long did it take for you to start dating others of your gender?
I’m using “dating” and “having sex” as meaning the same thing in this instance. At least for me they were. I was 23 years old before I had sex for the first time. And had sex with that same person on-and-off for about 6 months. We just had hours and hours of sex on the weekends, and didn’t date.

The first person I actually “dated” dated was the person who would become my Husbear. We had sex the first time we met in real life, and then I didn’t let him have sex with me for a good month. Just to see if he was really interested in me. I guess he was.

8. Have you encountered discrimination because of your sexuality? What types?
I consider discrimination to be the denial of some act or service to someone because they’re different. I know I’ve been discriminated against for other reasons, such as having visible tattoos. But not for my sexuality. Directly. Yet. Which is really odd when I think about it considering I live in the South.

9. Have you ever been favored in any way due to your sexuality?
Again, I can’t say I have. At least not that I am consciously aware of. Maybe I’ve gotten better service from a waiter or a flight attendant, but again, I don’t know.

10. Do you know of other homosexuals who are afraid to “come out”? Do you feel the need to “out” them involuntarily?
I live in the South, the land of a church on every corner, and the land of the Klan. (You know, I’m sure there’s a connection there.) So yes, I know many people who are afraid to come out. And I wouldn’t out them, at least not intentionally. That’s their own path to take.

11. How do you feel about the issue of same sex marriages? Homosexuals in the military?
Two people can live together in harmony without paperwork. So I don’t really understand why anyone would want to get “married”, aside from ALL the economic and social benefits of it as allowed by the laws of the land. Which I guess is the whole point. And always has been. Marriage historically has NEVER been about love. It’s always been about property. Something the brain-dead people defending the “sanctity of marriage” today seem to forget about.

And I seriously don’t see the big deal about why someone’s sexual orientation could disallow them to participate in the protection of our country. If someone is so hung up on a gay person being around them, maybe they are the one with the issues.

12. What groups and/or people (if any) helped you deal with the process of accepting your homosexuality?
As bizarre as this will sound, Christians. More specifically all the Christian schooling I went through. I was, oddly enough, taught to ask questions. Well, maybe that wasn’t what I was taught, but that’s what I learned. And in so questioning, I questioned what I was being taught. That’s what started me down the path of accepting myself.

The Husbear helped me a lot when we got together as well, and still continues to this day.