For the last two weeks or so, the Husbear has been acting like a kid who is about to go to Disney. 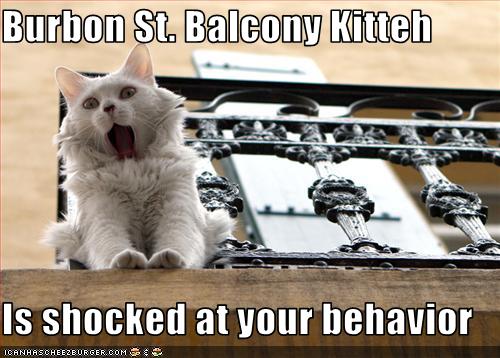 It must be about time for the annual trip to New Orleans for Southern Decadence….

Someone I consider a friend has just started blogging. Robyn is the spousal unit of the coolest and best manager I had during my years at the OGRE. She has just been diagnosed with cancer. She has started blogging to keep her friends and family informed on her journey, as well as educate and help others along the way.

I ask you to please check out Robyn’s blog, My Journey is just beginning, and send her the love, support, and encouragement that I know you, my readers, can.

The Husbear and I have traveled to New Orleans for Southern Decadence every year since 2003 (except for 2005 when Katrina rolled through). For the last few years we have gone as part of the Decadent Ducks, and will do so again in another week!

click to see pics from all our Decadent adventures

While the following is is not something I normally would post, Troy, the head of the Decadent Ducks, asked so I will.

Decadent Ducks Raise Funds for HIV/AIDS Organization Food For Friends
Hurricane Gustav put a damper on the 2008 Southern Decadence festivities, but a dedicated group of “ducks” are heading back to New Orleans, determined to make up for lost time. The Decadent Ducks, a gay travel and social network, will return to the French Quarter over Labor Day weekend for their 12th year of revelry. The Ducks, led by Bennington, Vermont resident Troy Richardson, anticipate over 350 of their group members to attend the 36th annual LGBT celebration this year.

In addition to various events and parties scheduled throughout the weekend, the Decadent Ducks are putting their numbers to good use by joining Southern Decadence XXXVI Grand Marshals Tittie Toulouse and Paloma in raising money for Food For Friends. The Food For Friends Program of NO/AIDS Task Force has been supplying groceries and home-delivered meals to HIV-infected and -affected individuals in the greater New Orleans area for 12 years. The Ducks will host a silent auction and raffle during the course of the weekend and will donate all proceeds to the program.

“The people of New Orleans have always welcomed us with open arms and treated us with tolerance and respect,” Richardson explains. “I can’t stress enough how important that is, especially in this day and age, when the gay community seems to be under attack so often. That means a lot. We’ve been very lucky, and we’re really excited to be able to give something back.”

More than just a travel group, the Decadent Ducks have evolved into a close network of friends from all over the world, and they credit New Orleans for fostering and inspiring their spirit of camaraderie and friendship. With last year’s event cut short, the group is looking forward to this year more than ever. “There’s definitely a greater sense of anticipation this year,” Richardson says, with a smile. “We didn’t get the full experience last year, so we’re hoping to make up for it. I didn’t even get my beignets and cafe au lait last year! We can’t wait to get back!” The 700 Club (700 Burgundy Street) will be acting as the official bar of the Decadent Ducks all weekend.

Discounted hotel rooms with the Ducks are still available. To learn more about the Decadent Ducks or Food For Friends, visit the official website at www.decadentducks.com.

The Husbear has been craving an iPhone for a long time. So I finally broke down, broke his contract with Sprint, and surprised him with an iPhone a few weeks ago. He’s been raving about it ever since. “It’s so simple to use,” he says. It must be, if he can use it without asking me to many questions on how to do this or that with it.

I have to admit: it was easy to set up. Ordered it online from Apple. FedEx delivered it to my doorstep. I opened the box, plugged it in to my computer, and walked through activation with iTunes. Simple.

After playing with his phone for a few days, I went and did the unthinkable. To me. After years of having several Windows Mobile devices (first my Motorola Q with Alltel, then my Motorola Q9c with Sprint) I purchased an iPhone for myself.

Those around me have known my vehement opposition to and ridicule of all things Apple. Not because I’m a “PC” (which I am!). I grew up building computers. That’s what made computers so interesting to me. The ability to build, modify, and play with all sorts of components of my choosing. And I could load almost any OS (Microsoft’s or others) on any hardware I put together. For me the opposition to all things Apple stemmed from their closed, proprietary technology.

So the last few days I’ve been trying to put into words the reason I switched.

I think the biggest reason for me as to why I went with the iPhone: a centralized location to find applications (at the App Store), and the fact that so many companies seem to be offering only iPhone-based applications and services.

I’ve easily found application replacements for everything I did with my WinMo device without having to search all over the Internet for them.

Had Microsoft done the smart thing years ago by creating a centralized application store, I think WinMo would have done extremely well outside the business world. Now they’re attempting to do just that. To late, in my opinion.

I still feel dirty for having taken a bite of the Apple. I’ve been assured by some of you out there who follow me on Twitter that the feeling will pass. I’m sure it will. But it’s still an odd feeling to have the “enemy” sleeping in my house.

Nothing lets you know I’m still alive but slightly distracted like filling out a MeMe.

The following MeMe was absconded from Alexander at Voenix Rising.

Feel free to ask for clarification of these in the comments section if you so desire….

Rules:
1. You can ONLY answer Yes or No.

2. You are NOT ALLOWED to explain ANYTHING unless someone messages or comments you and asks—and believe me, the temptation to explain some of these will be overwhelming nothing is exactly as it seems.

Now, here’s what you’re supposed to do: Copy and paste this into your notes, delete my answers, type in your answers and tag as many of your friends as you’d like to. Or not.

The “Exam”:
Kissed any one of your Facebook/Myspace/Twitter friends? yes
Been arrested? no
Kissed someone you didn’t like? yes
Slept in until 5 PM? yes
Fallen asleep at work/school? yes
Held a snake? yes
Ran a red light? yes
Been suspended from school? no
Experienced love at first sight? no
Totaled your car in an accident? no
Been fired from a job? no
Fired somebody? yes
Sang karaoke? yes
Pointed a gun at someone? no
Done something you told yourself you wouldn’t? yes
Laughed until something you were drinking came out your nose? yes
Caught a snowflake on your tongue? yes
Kissed in the rain? no
Had a close brush with death (your own)? no
Seen someone die? yes
Played spin-the-bottle? yes
Sang in the shower? yes
Smoked a cigar? yes
Sat on a rooftop? yes
Smuggled something into another country? no
Been pushed into a pool with all your clothes? no
Broken a bone? yes
Skipped school? yes
Eaten a bug? yes
Sleepwalked? no
Walked a moonlit beach? yes
Rode a motorcycle? yes
Dumped someone? no
Forgotten your anniversary? no
Lied to avoid a ticket? no
Ridden on a helicopter? no
Shaved your head? yes
Blacked out from drinking? yes
Played a prank on someone? yes
Hit a home run? no
Felt like killing someone? yes
Cross-dressed? no
Been falling-down drunk? yes
Made your girlfriend/boyfriend cry? yes
Eaten snake? no
Marched/Protested? no
Had Mexican jumping beans for pets? yes
Puked on amusement ride? no
Seriously & intentionally boycotted something? yes
Been in a band? no
Knitted? no
Been on TV? yes
Shot a gun? yes
Skinny-dipped? yes
Gave someone stitches? no
Eaten a whole habeñero pepper? no
Ridden a surfboard? no
Drank straight from a liquor bottle? yes
Had surgery? no
Streaked? no
Taken by ambulance to hospital? no
Passed out when not drinking? yes
Peed on a bush? yes
Donated Blood? no
Grabbed an electric fence? no
Eaten alligator meat? yes
Eaten cheesecake? yes
Eaten your kids/siblings Halloween candy? yes
Peed your pants in public? no
Snuck into a movie without paying? yes
Written graffiti? yes
Still love someone you shouldn’t? yes
Think about the future? yes
Been in handcuffs? no
Believe in love? yes
Sleep on a certain side of the bed? yes