Blobby got the theme pick this month, so he threw out some choices, and I kind of steered him in a direction. And that direction would be songs released on soundtracks, and as Blobby stated: “music that appears / appeared initially on soundtracks. not cast offs from other albums that ended up on a soundtrack.” I think I can manage this one. At least better than last month’s.

Before Danny Elfman was Danny Elfman the composer, Danny Elfman was singer and songwriter of the 80s new wave band Oingo Boingo. Both the band, and Elfman, have a very distinctive sound: you can hear one of the pieces and just know who it is. At least I do, in their case.

I still don’t really know the origin as to how Elfman became involved in the “Weird Science” movie project by John Hughes, but he did. And out of it came the theme song to the movie.

It’s a catchy tune. And one that definitely always reminds me of the movie.

While I’m not a holiday kind of person, I do understand others—like the Husbear—feel differently about this time of year.

I originally posted this image in 2009, but it’s one of those things that I needed to come back to this year. 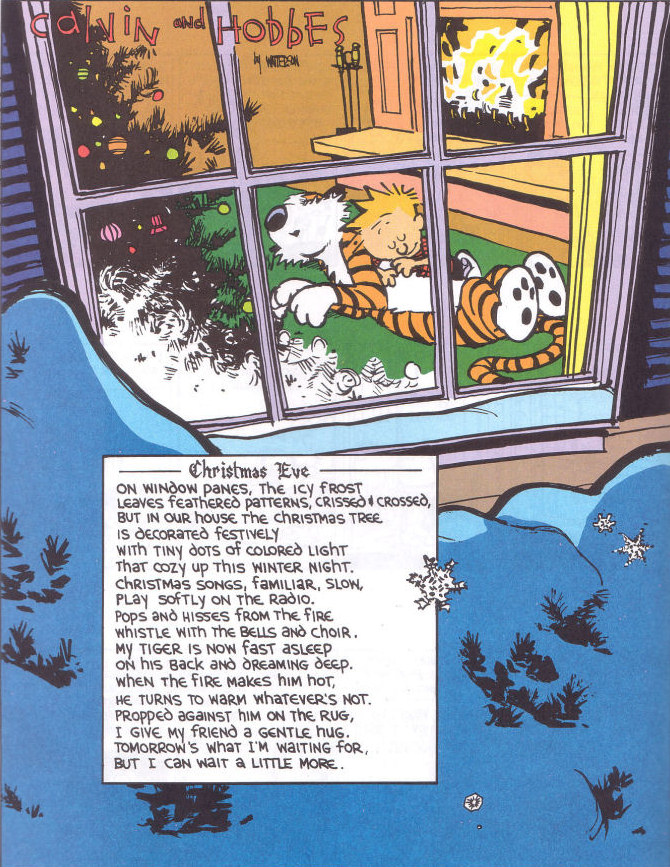 — Christmas Eve —
On window panes, the icy frost
Leaves feathered patterns, crissed and crossed,
But in our house the Christmas tree
Is decorated festively
With tiny dots of colored light
That cozy up this winter night.
Christmas songs, familar, slow,
Play softly on the radio.
Pops and hisses from the fire
Whistle with the bells and choir.
My tiger is now fast asleep
On his back no dreaming deep.
When the fire makes him hot,
He turns to warm whatever’s not.
Propped against him on the rug,
I give my friend a gentle hug.
Tomorrow’s what I’m waiting for,
But I can wait a little more.

Holiday hugs to all my family and friends.