Those against the National “Day of Silence” have published their directions for parents who are against it.

Note how easily these reasons of why parents should tell their children they are against it can be easily altered to fit the thoughts of the rest of the free-thinking world towards those who profess to be Christians:

And yet, try to talk with most who profess to be Christians and you get the whole “don’t bash my religious freedoms” speech. Ironic that they don’t allow others to express their own views.

This has been my biggest beef with organized religion and a majority of those who follow it. It’s truly rare to encounter someone who will actually listen to and entertain counter-arguments without throwing up the defensive walls immediately. 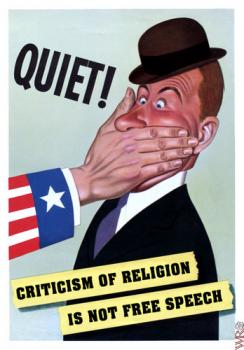 7 thoughts on “Apparently, criticism is only allowed in one direction.”