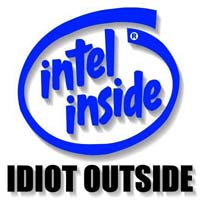 I used to think the above was true. As time passes—having worked in IT in mostly support functions for the last 13 years—I have slowly been changing my mind about the truth of the statement. And I am not necessarily sure my mind has changed for the better.

I believe people should understand how the tools they use work—including their home computers and peripheral devices. This, however, does not seem to be the case for a lot of the people I know (and I’m sure a large group of humanity in general) when it comes to computer-related technology. Being the only (former) computer technician many of my friends and relatives have known, I am frequently bombarded with computer support questions. They seem genuinely “scared” of the computer, as if it will somehow harm them if they do something wrong with it or to it. Are people afraid of their dishwashers, washing machines, pencils or calculators?

Why does fear come to them when they sit in front of a computer? From where did/does this emotional response come? I have yet to come across anything that cannot be fixed when it comes to “broken” computers, and I doubt I ever will. The computer is just another tool. There is nothing that can be done that can’t be un-done (somehow).