This post is more a “historical document” for me more than anything else. I wanted to get it written down in electrons before I forget. I was actually going to mark it Private, but I figured I’d bore y’all with it, especially since Karen asked. Because I’m nice like that. Just because. And I like to end my sentences with prepositions.

The sock-in-progress on my left leg is composed of a random assortment of mostly “unplanned” tattoos, all of which I have tattooed upon myself up to this point. I have a general idea in my head of what that area represents as a whole and what I want to do with it, but that’s about it. No real forethought or pre-drawn design. Because I can be random like that.

All the pictures will embiggen if you click on them. Not that you’ll want to.

2006.03.23 – It all started with the first tattoo that I did on myself: a kuma. I did this as part of the practical portion of my tattoo license exam. I know, I know. Kanji. How original, right? Especially from a tattooist. 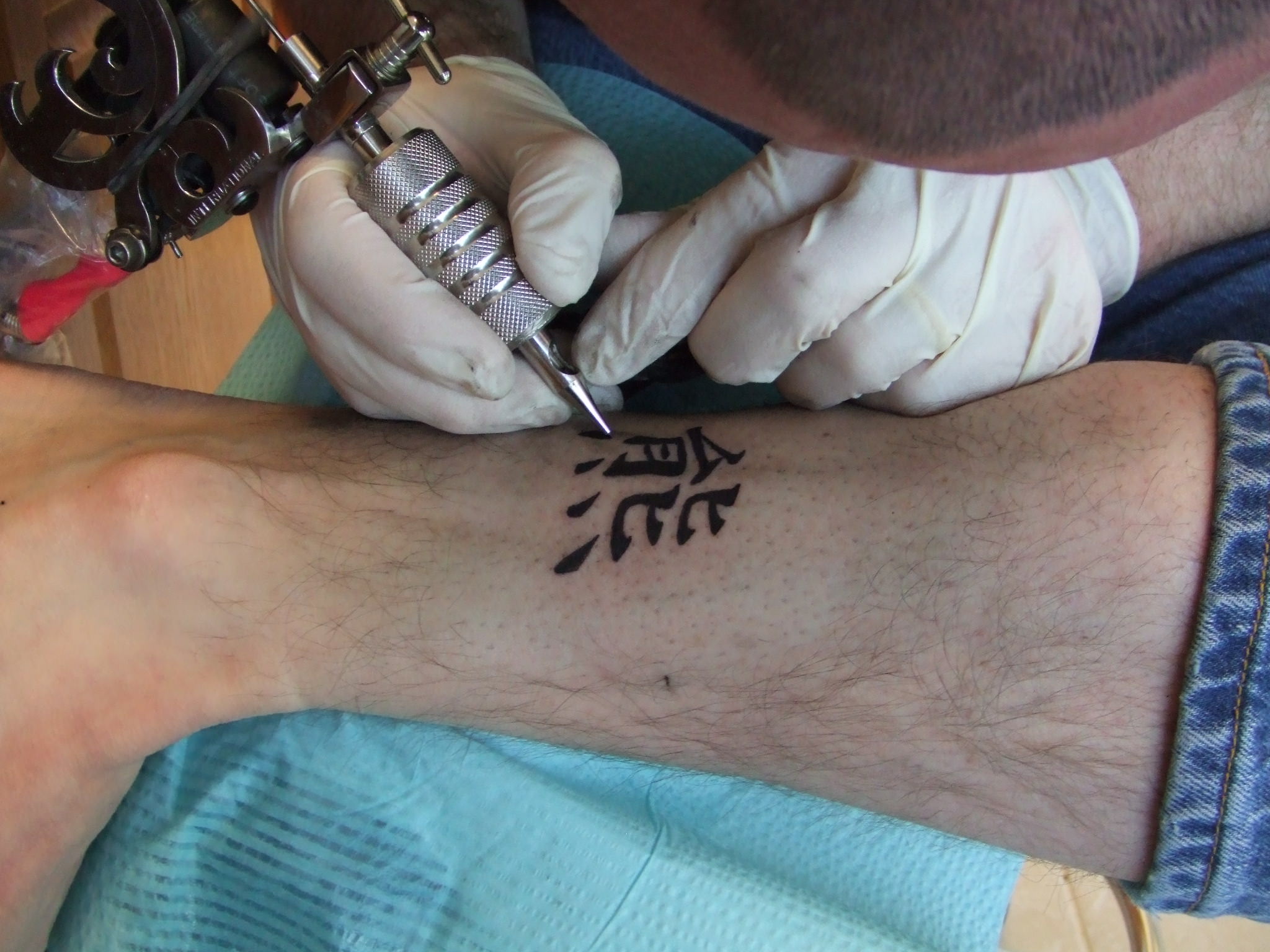 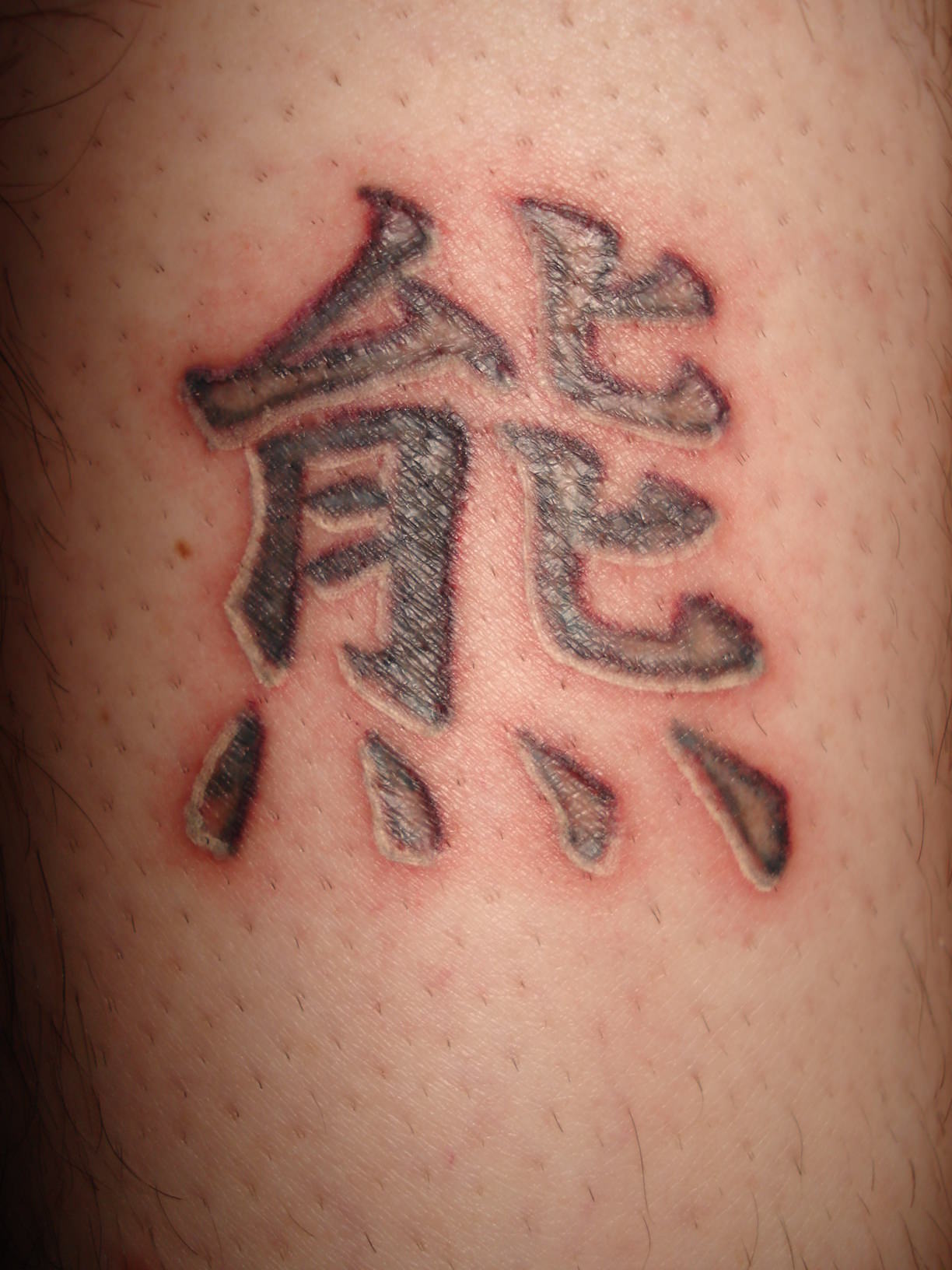 2006.10.27 – Then came my DNA strand. My original intent with the DNA was to have helices exploding up and around my leg, across my thigh, then onto my back. I’m not sure If I’m still doing that, but there’s definitely room if I choose to. 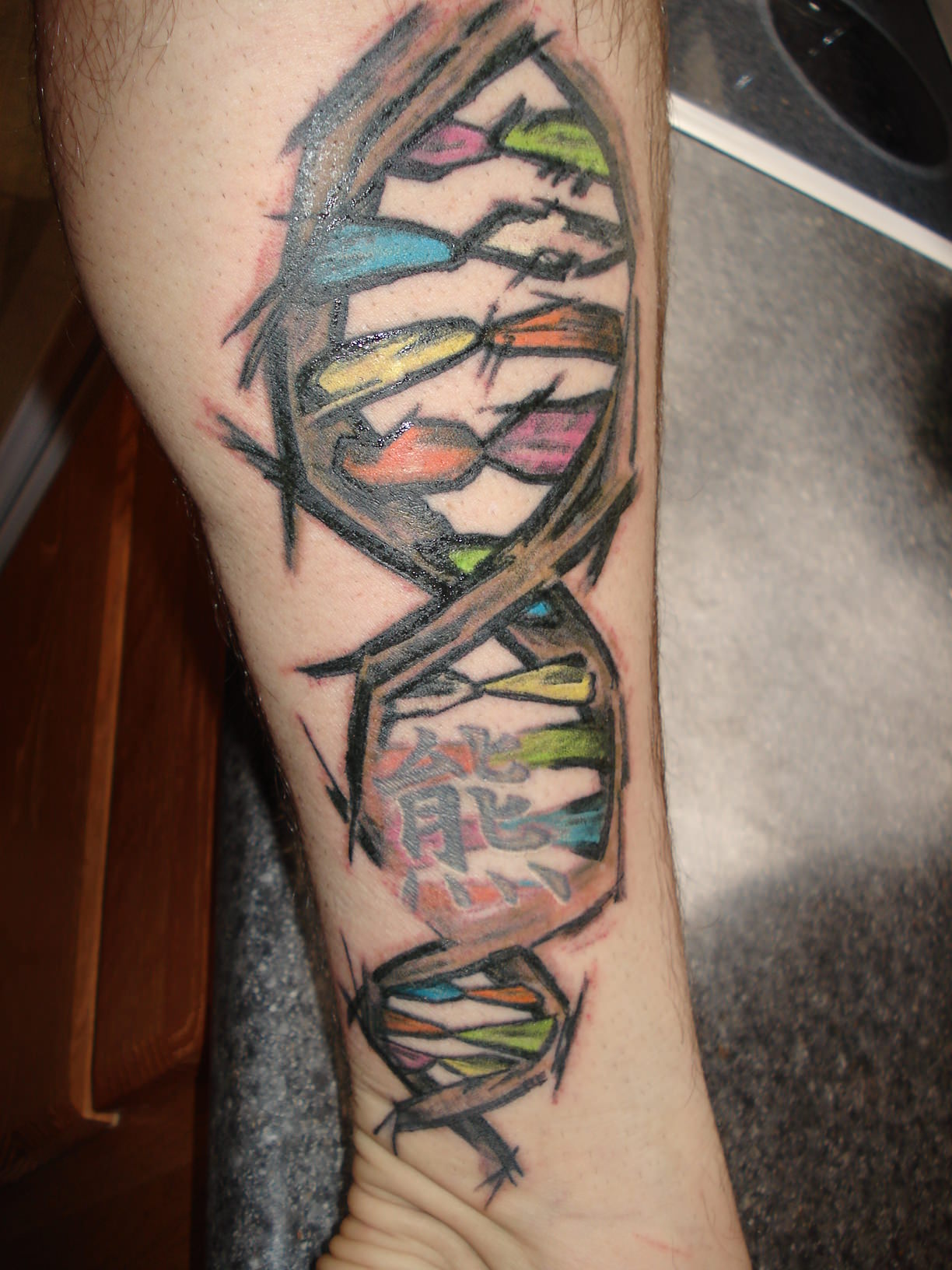 2007.04.22 – Six months later I added some background behind my DNA. After I did it, I always felt it was too dark and it totally ruined the piece for me. Which I guess it’s better it happened on me than on a client! But still. Ugh. It just goes to show it happens to even the best of us. 😉 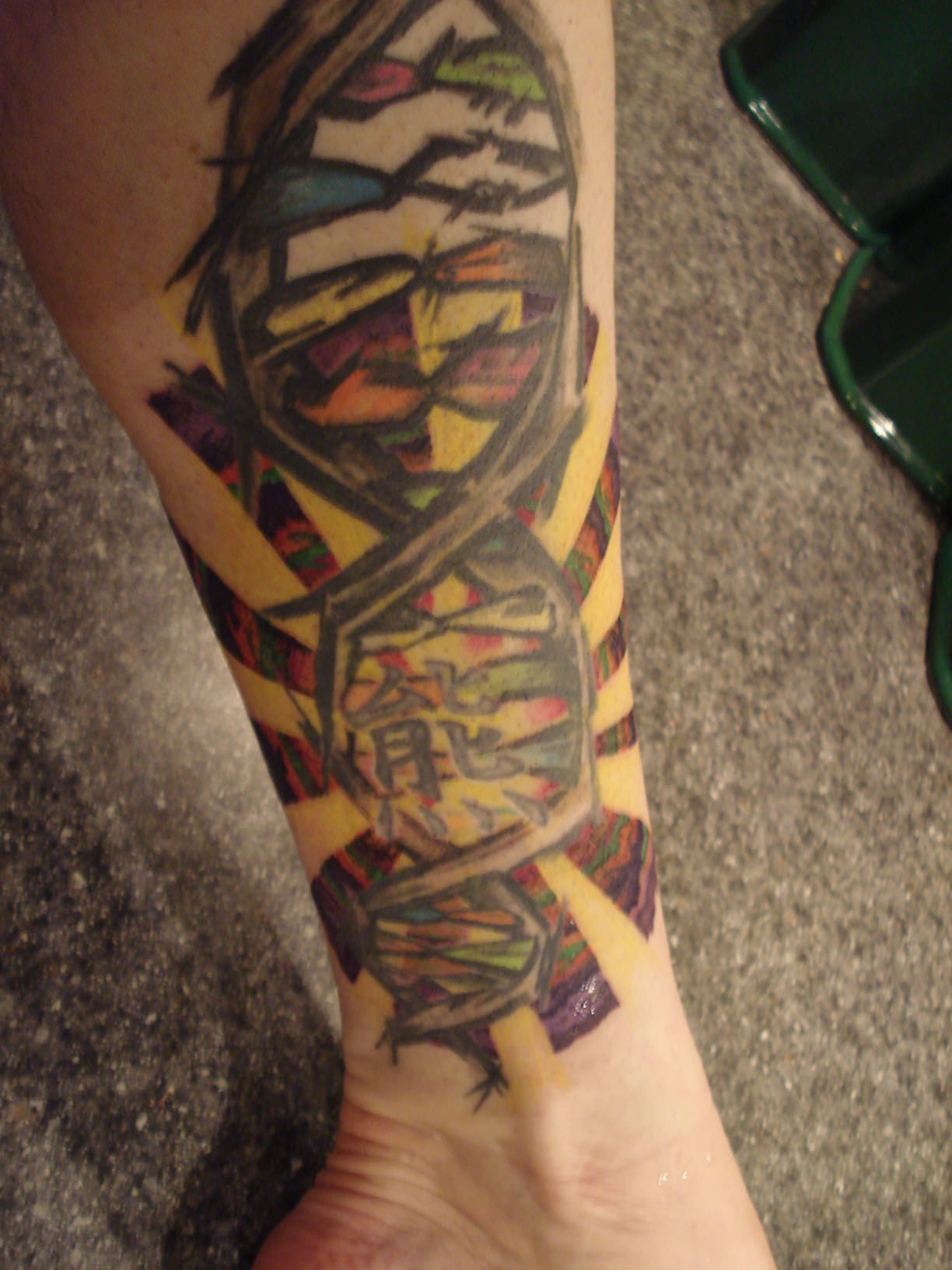 2007.05.05 – I later attempted to adjust the light explosion by adding a little more color variation in the rays. But I still didn’t like how it looked. *grrr* 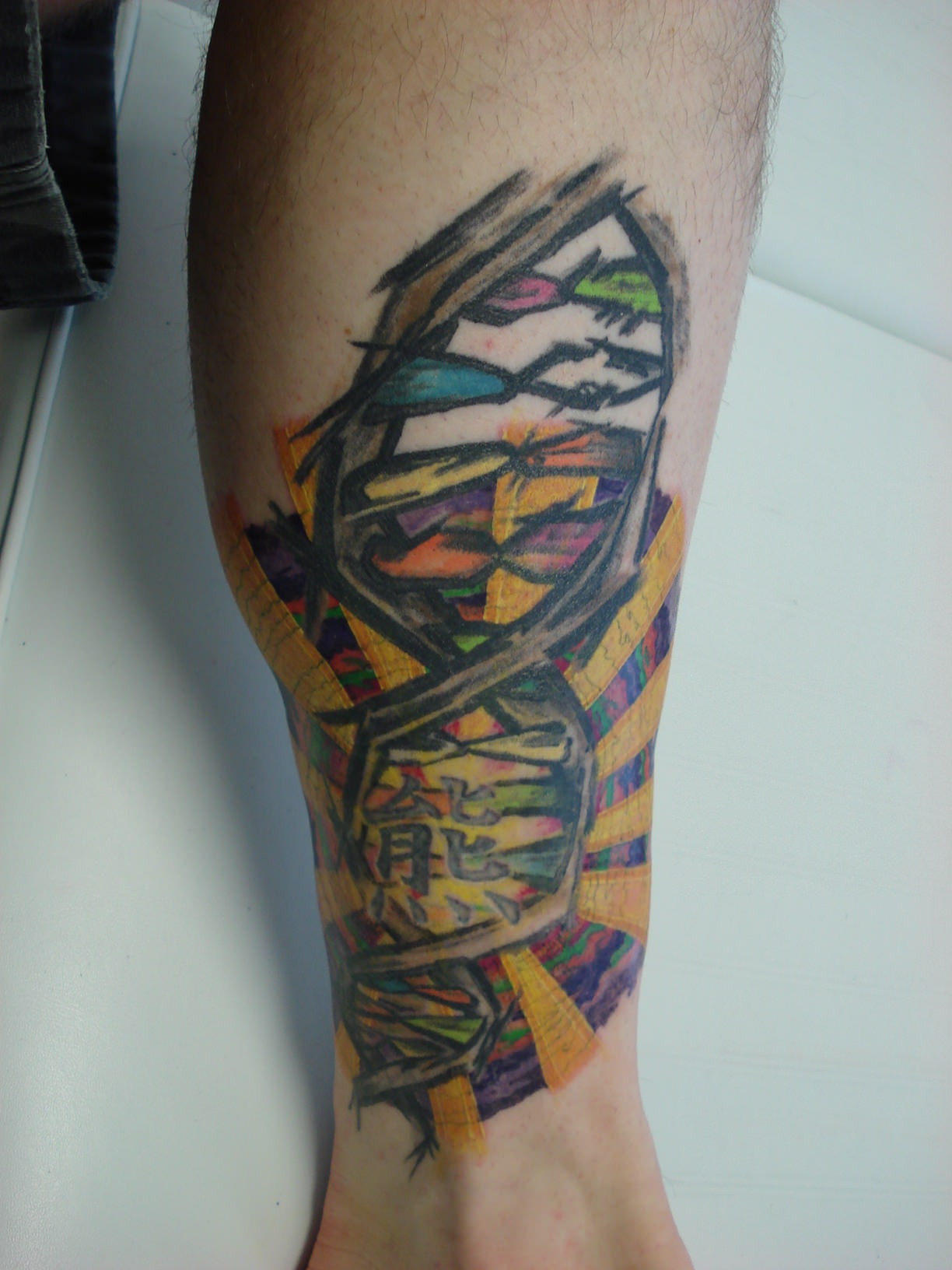 2008.07.12 – Fourteen months later, I was bored and decided to see if I could change the color of the kuma from black to red. 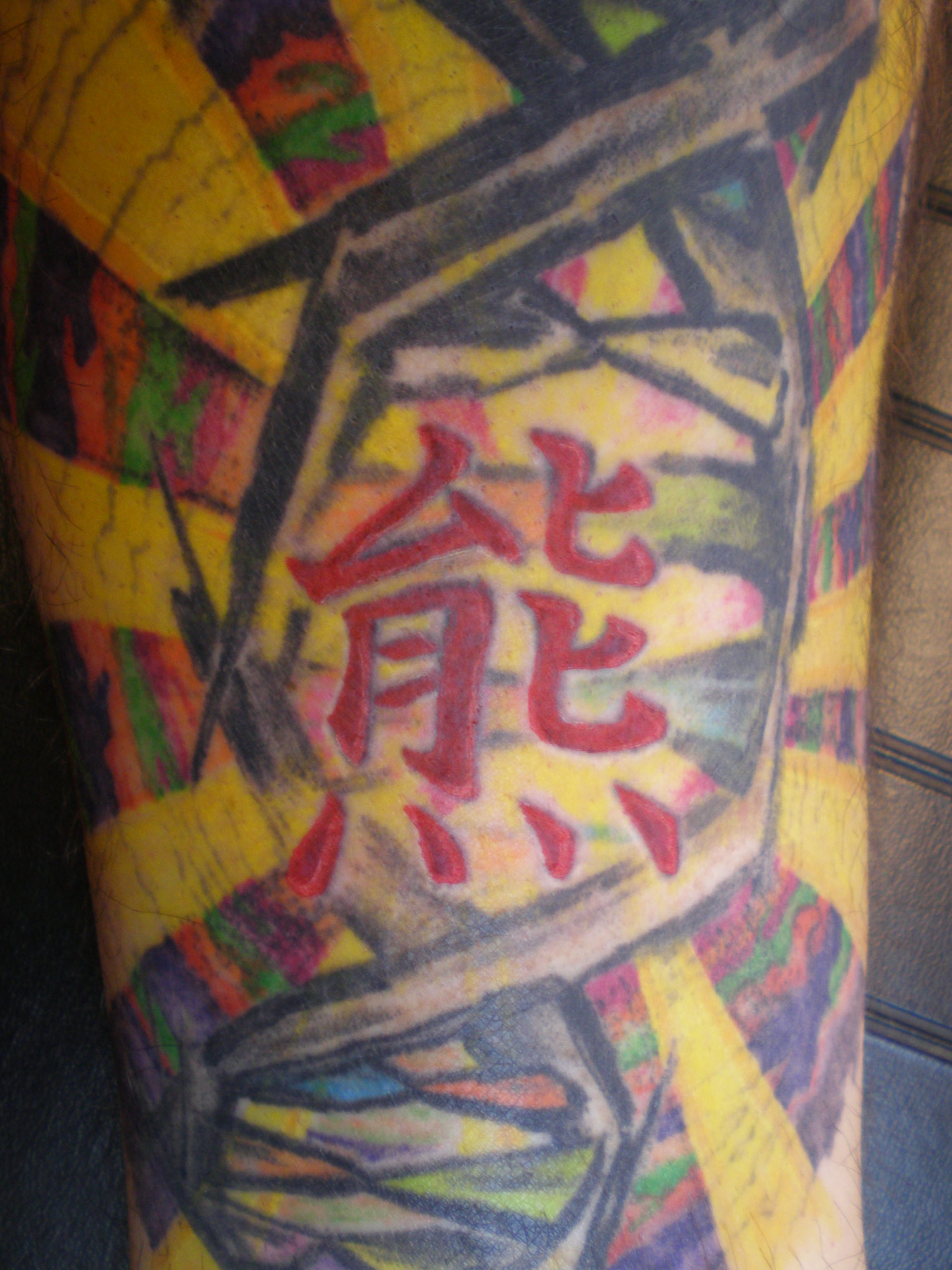 2010.03.31 – And then nothing for about 20 months. Because sometimes it’s so busy there’s not time to tattoo one’s self. Which I’m totally okay with. Until I got the idea for my Rubrduck. (Get it?) It’s a caricature of me as a rubber ducky. Here he is before I did the color work. 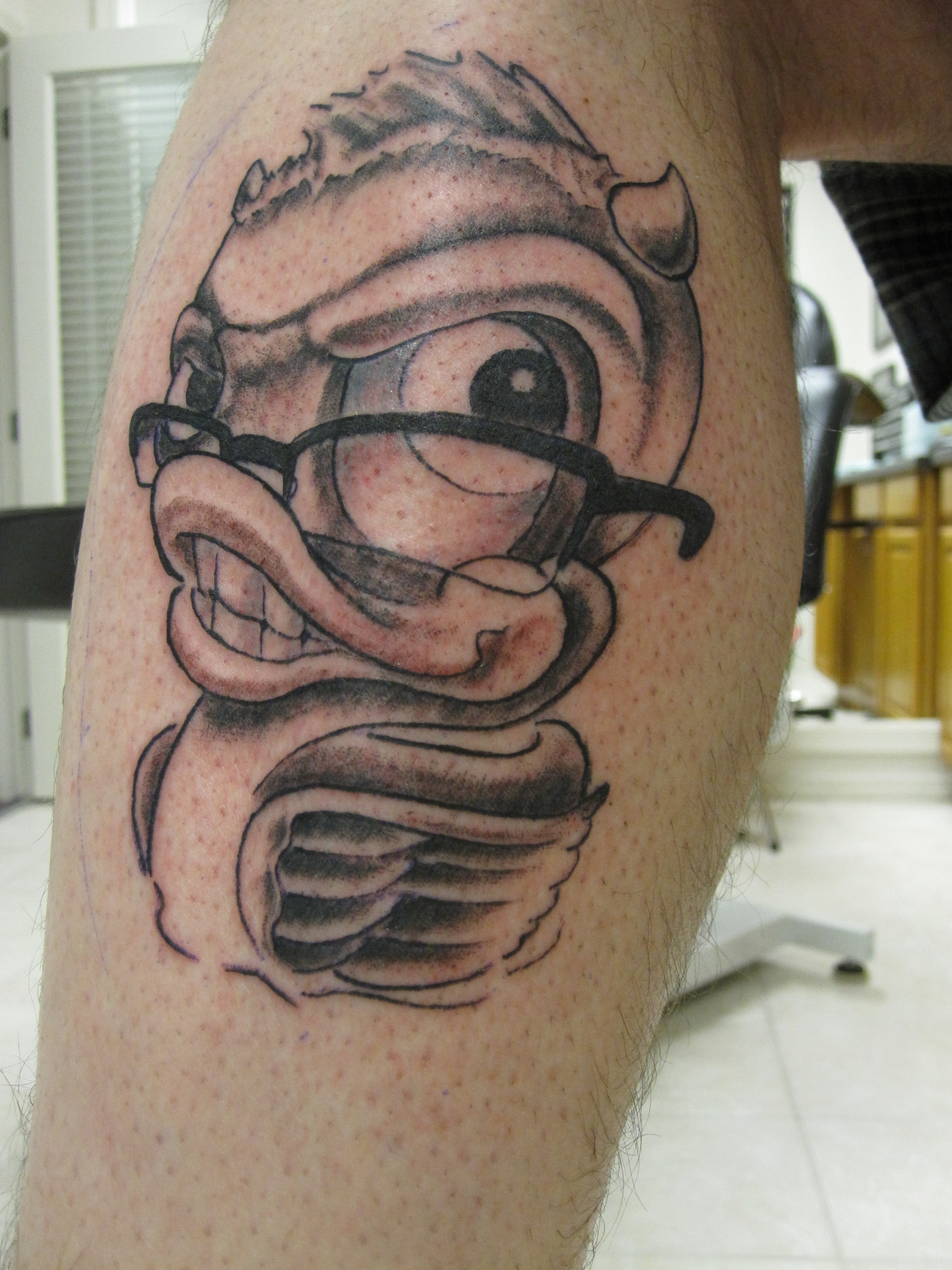 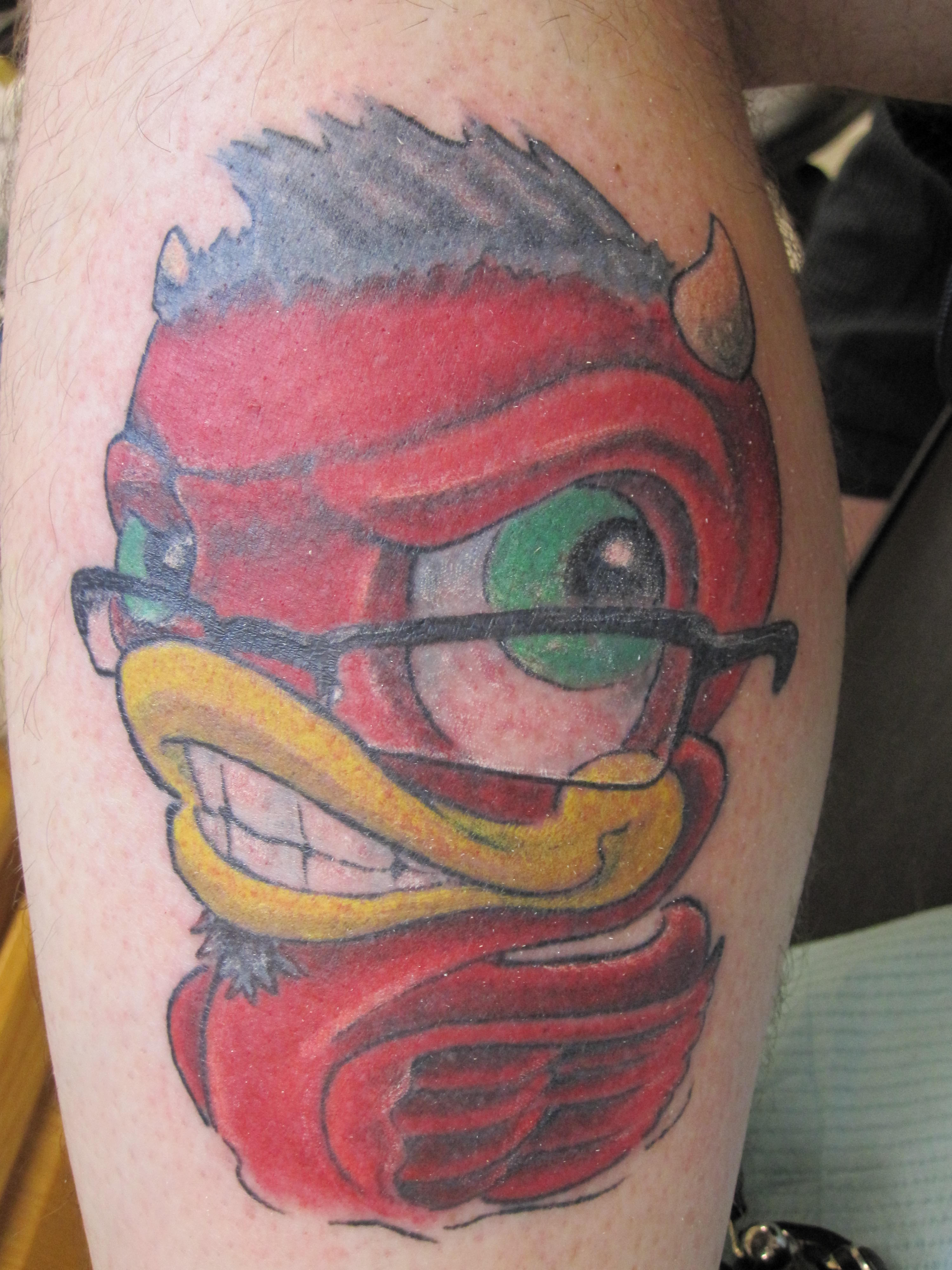 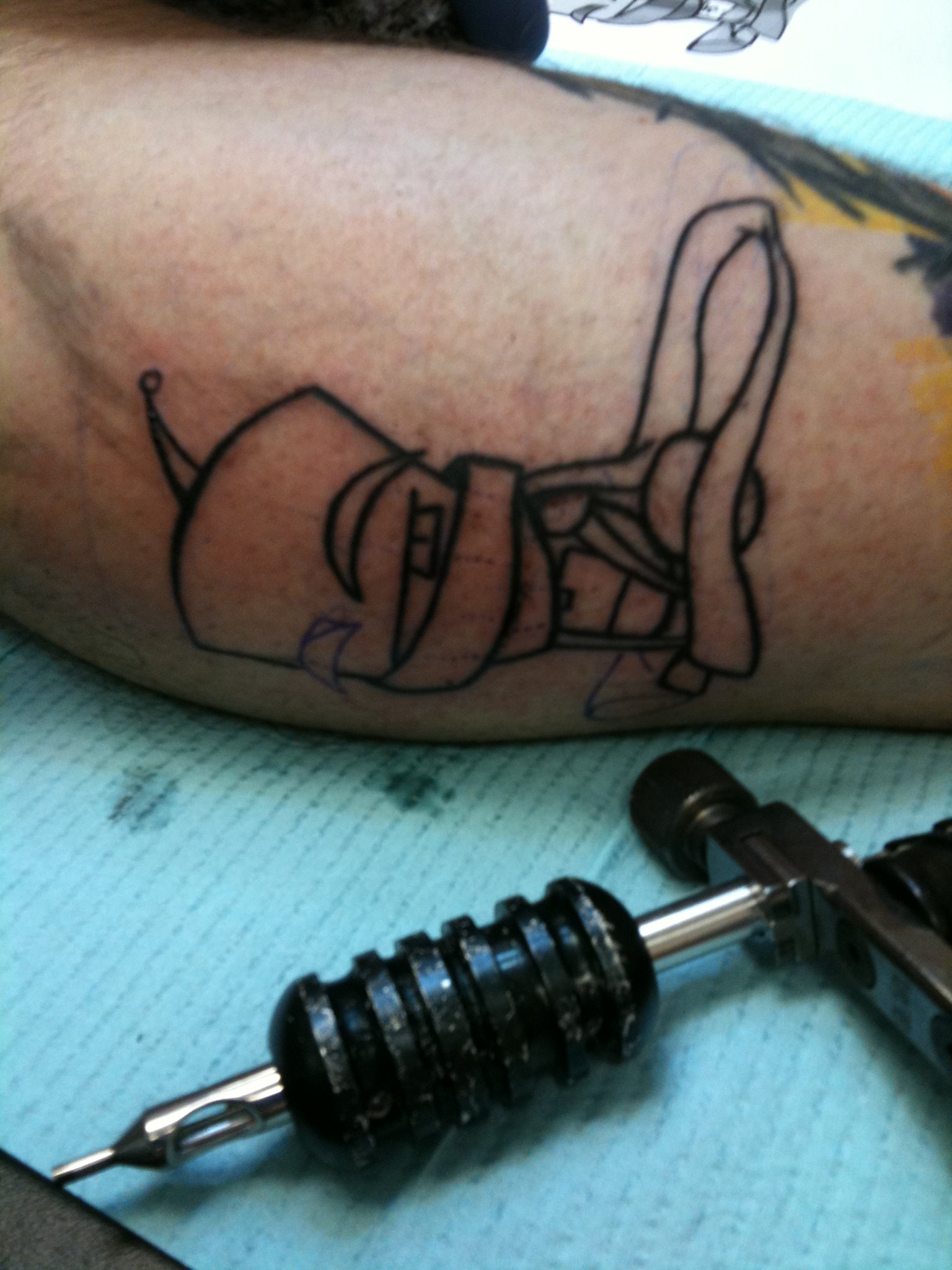 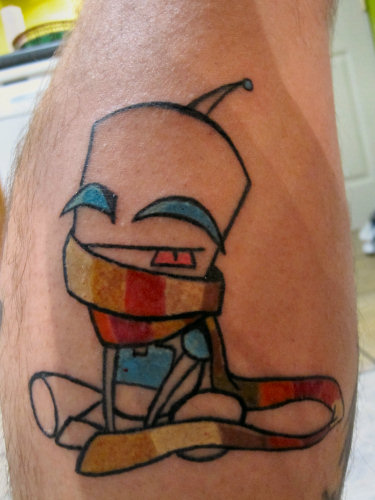 I even recorded a video for that tattoo session!

2011.01.07 – Under which I added the Doctor’s TARDIS. Part of the TARDIS covered up that horrible background around the DNA that I hate so much. 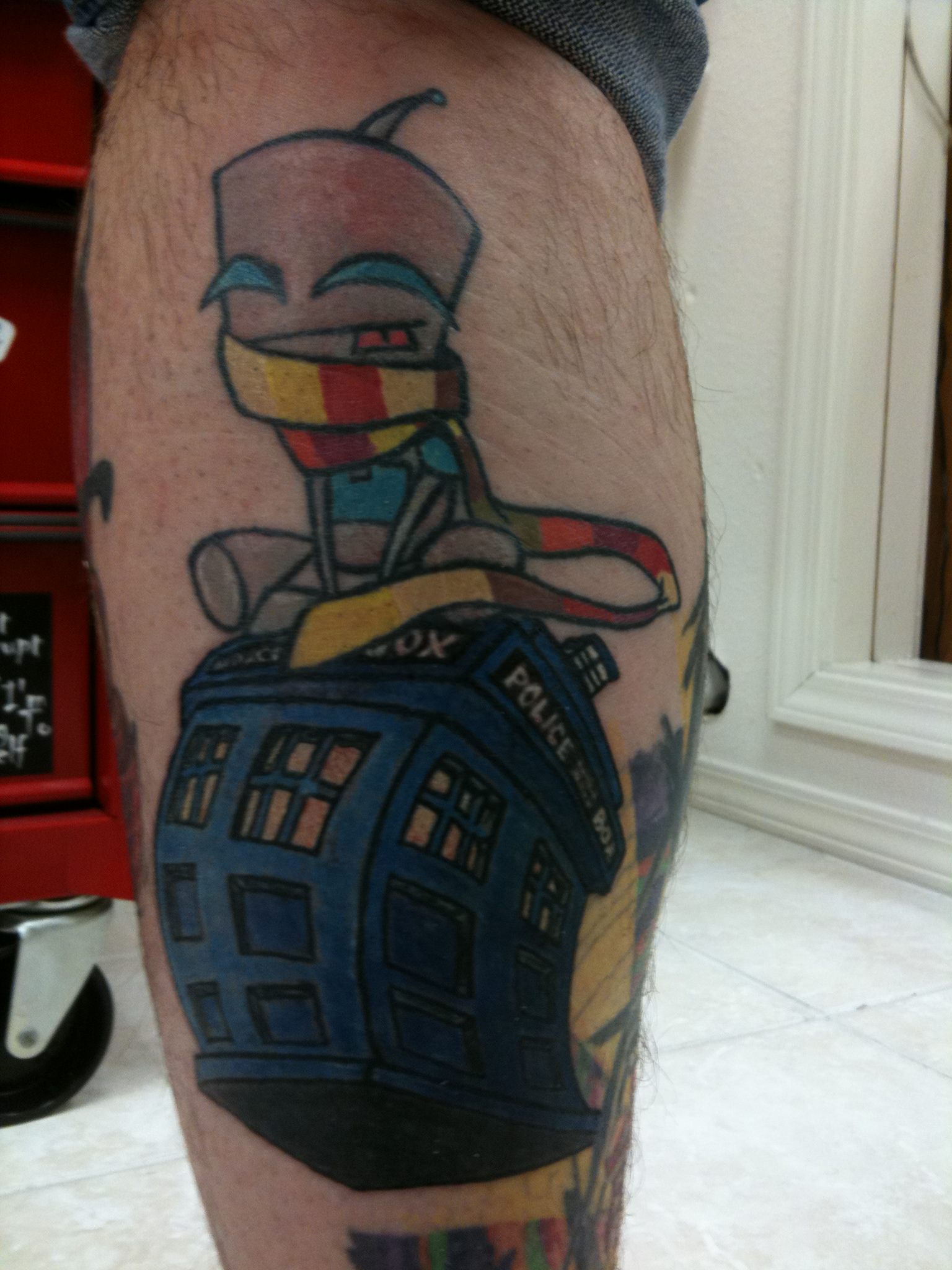 2011.02.22 – My Decepticons: Soundwave, Lazerbeak and Ravage. I was more an Autobot-guy growing up, but Soundwave and his tapes were always my favorite toys. They also covered up part of that background I hate! Right over my shin. 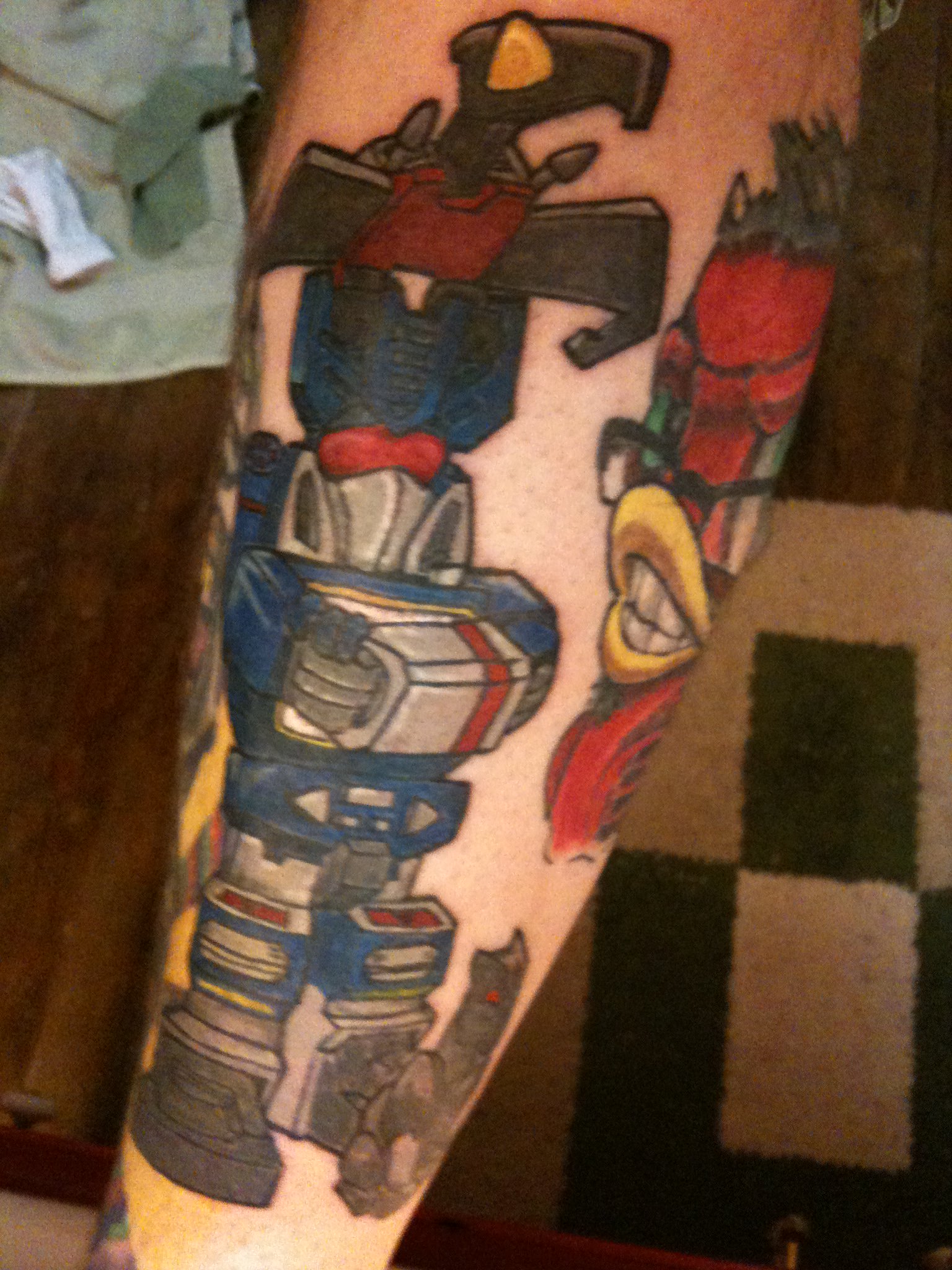 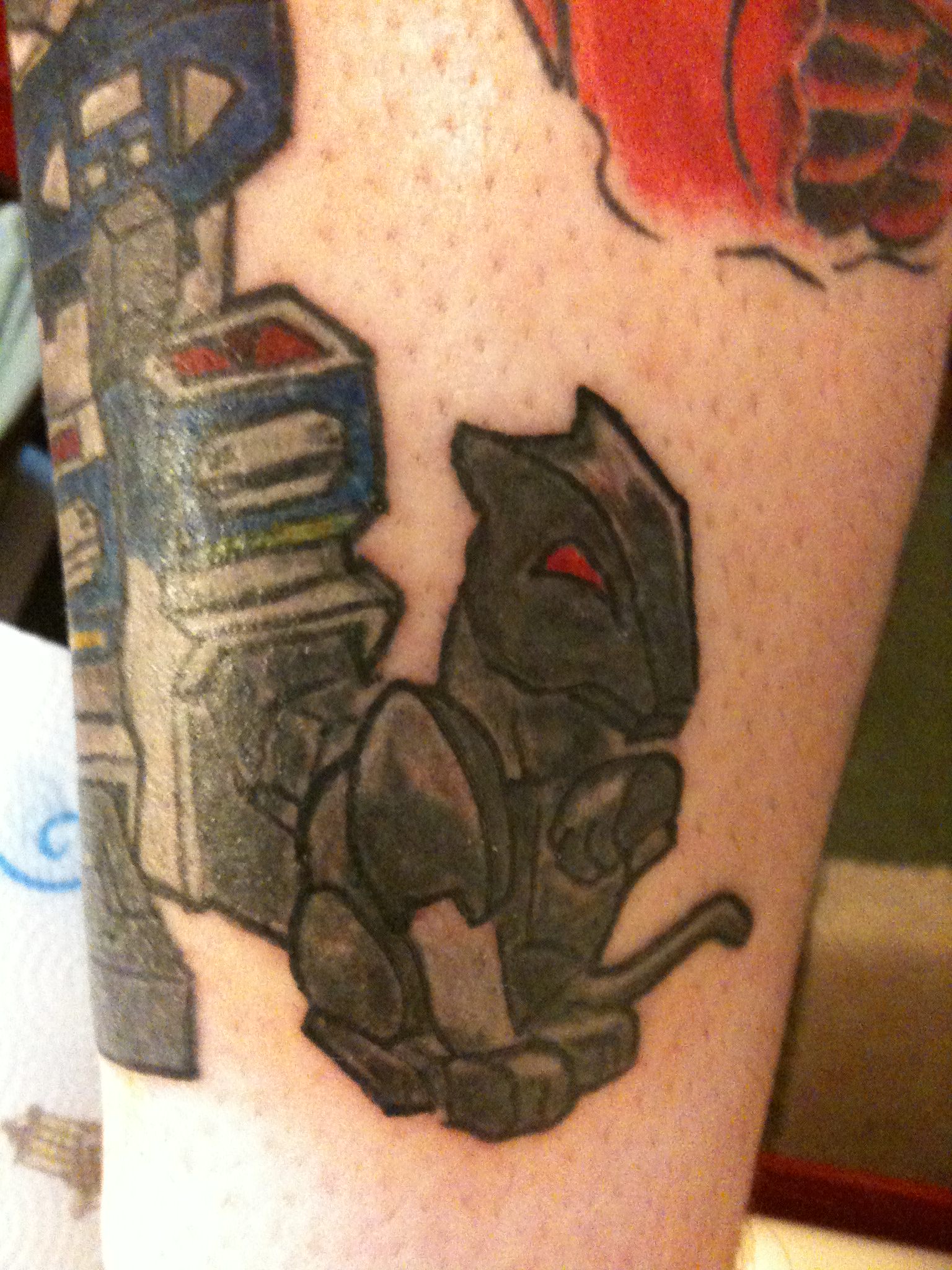 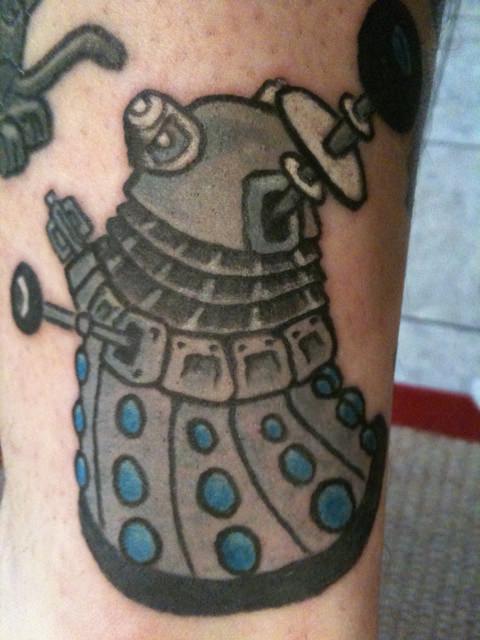 2011.04.17 – Calvin and Hobbes. Riding in their time machine. I was seriously considering doing my right sock entirely of my favorite Calvin and Hobbes strips. I have that much love for what Bill Watterson did with them. 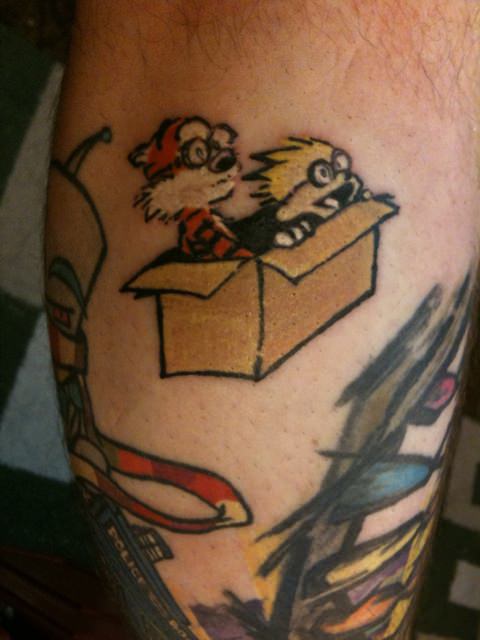 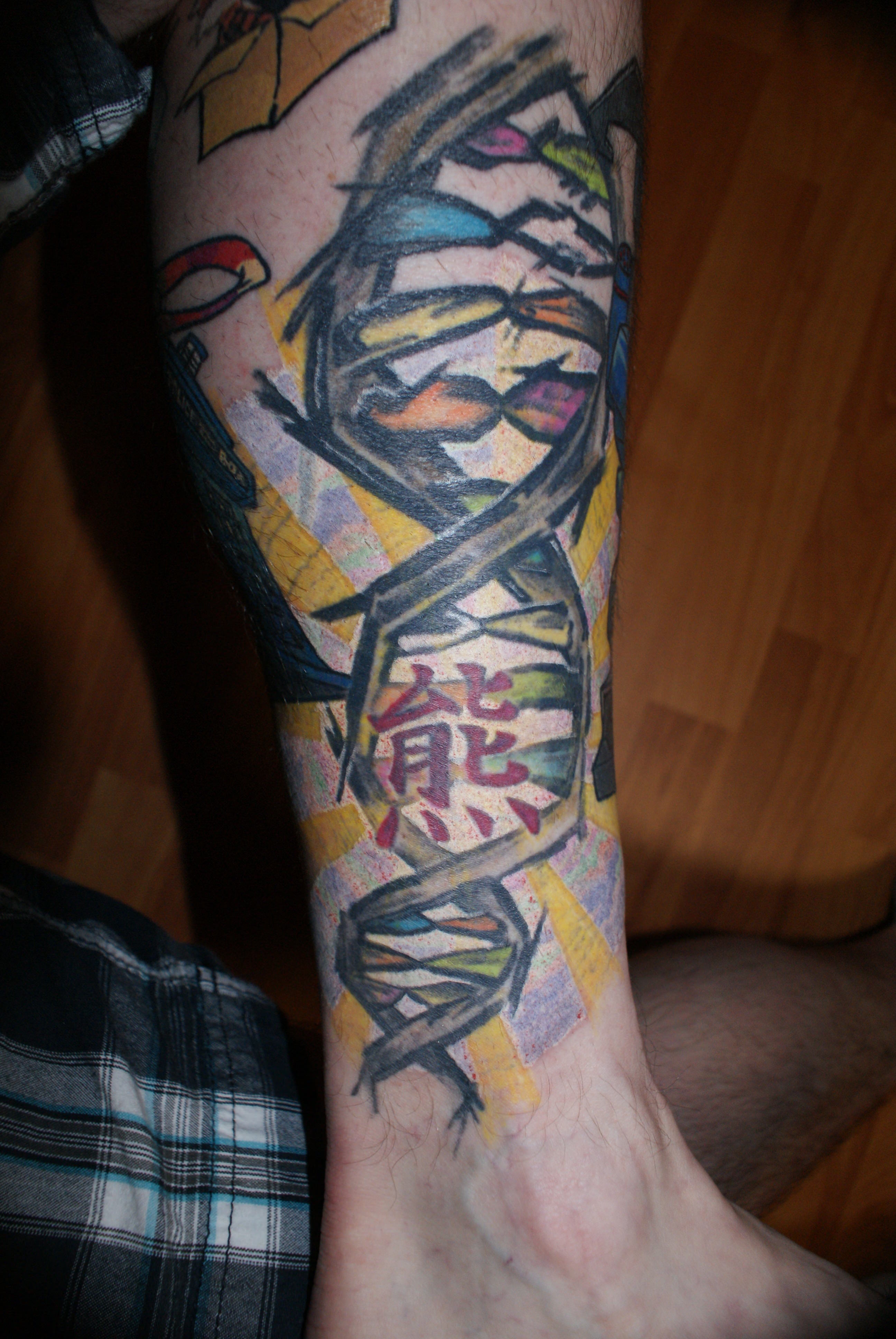 I’ve decided I’m going to “white it out” again one more time and white out the light rays as well. It won’t make the piece go away, but it will lighten it enough that I can redo the background to something a little brighter and more subtle.

I still have to tattoo the top of my foot and a couple other small spaces that I want to fit some little things into, then filler background for the whole thing.

And there you have it.

10 thoughts on “My Tattoo Evolution: My Left Sock, so far…”