As a child, I was the puny, little nerd who was used as the ball in dodge-ball. As an adult, I still mentally feel like that on the inside. I’m not a fighter. Physically, at least. I don’t think violence solves problems. I tend to run from those kind of situations.

And let’s just say it escalated in a negative fashion after that point. Both the vile, nasty vulgarity spilling out of his mouth, and the anger that was building up inside of me.

I don’t remember everything that happened, but I know I said something in the parking lot to him about his derogatory and offensive language. At which point something else derogatory was said by him directed specifically at me.

I then did something I don’t do and that I’m not proud of: I shoved him. What the Hell, Erik?

I was able to duck out of the way. Mostly.

I shoved back harder, because it’s what I do apparently. And while he was down I managed to get to my truck and leave. Yes, I ran. It’s what I do. I believe there’s only three ways to win a fight: the cops show up; someone dies; or, someone runs. So I ran.

Yes, alcohol was involved. But I’ve never been known to be a hostile drinker. If anything I usually get goofy. Well, goofier than I usually am.

The Husbear says he’s proud of me for standing up the way I did. But I’m not, and my actions have weighed heavily on me this week. Even though the dumb-ass guy instigated with words, I was the dumb-ass one who physically attacked first. I was raised to be better than that.

And that “mostly” I said above? This picture was taken today, six days after the incident: 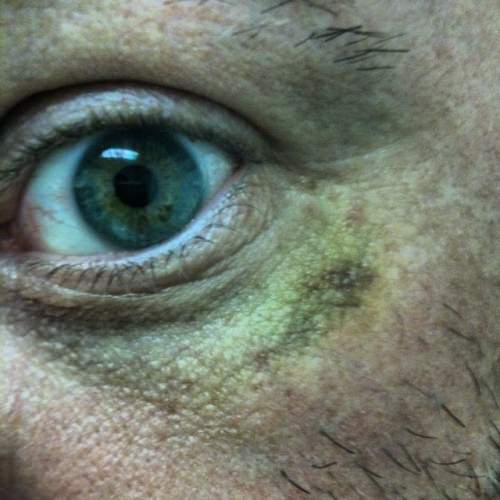 I’m not proud of that picture. It was a result of the first physical fight I’ve been in as an adult, and for that I’m not proud.

More than anything, I’m embarrassed that I let a dumb-ass, homophobic idiot get under my skin.