Out exploring the back roads in Pea Ridge by my lonesome while the three bears are at a movie.

Jim of Jim’s Stuff started the “Pic a Day in May” challenge last year. I did it last year, and felt like I’d do it again this year.

For almost the last three years, the Husbear and I have had someone else living under our roof. Someone I’ve termed “the Interloper”.

To be blunt: I didn’t want the Interloper here, or around. And yet he was, and it took nearly three years to get him out of here. Something I need to write a little more detail about at a later time.

I was done with the Interloper from day one of meeting him. Something about him I didn’t like. And I couldn’t/can’t put my finger on it. He was/is young. He was/is extremely immature. He was/is extremely lazy. And there’s a few other things I could write about his character that I will refrain from. For now. He was like a leech you just couldn’t pull off. He was always attached to the Husbear at the hip. Like a dog starved for attention.

But the Husbear is a fixer, or caregiver, or whatever you want to call it. It’s definitely something his family does, so it must be genetic. But sadly to a fault. And this time it got in the way. In the way of our relationship. To a very serious point. Again, something I need to visit at a later time in more detail.

At the end of my rope, I finally gave the Husbear an ultimatum a few months ago: the Interloper would be gone by the Husbear’s birthday or serious changes would happen that no one would be happy with.

The Husbear and I returned home from his birthday weekend drive-around. We had a most excellent get-away. By ourselves. Which was the point. We needed time together. Alone. Which we haven’t had much of. At all. For nearly three years.

We came home, and he had all but what you see in this photo moved out. And probably a few other odds and ends that we’ll find over the next day or so.

The house is quiet.

And I am able to relax.

I briefly wrote about my family’s predilection to being pack-rats in February 2008. As a child I don’t remember stuff being everywhere, with the exception of one “storage” room. I don’t remember the house ever being dirty, because as kids we were always vacuuming and cleaning as part of our weekly chores. But I started noticing on visits after I moved away that it was becoming both increasingly cluttered and dirty.

Thanks to Netflix, over the last few weeks I’ve watched every episode of TLC’s “Hoarding: Buried Alive”, A&E’s “Hoarders”, and Animal Planet’s “Confessions: Animal Hoarding”. Watching the shows I definitely think there’s a difference between hoarders: some can’t let go of things for some mental reason, some just seem to be lazy, and some hoarders are a combination of both.

I definitely wouldn’t say either of my parental unit’s are lazy. My father owns and runs his own business, and is always working on equipment for it or making deliveries. My mom would be the classic “homemaker”. She’s always taken care of people. Us kids growing up. Then she took care of her and my father’s parents in the last years of their lives. Now she helps watch my sibling’s children at their respective homes.

I’m sure my father would actually call himself a “collector” and I do admit he definitely does collect some specific—and very nice—things. But there’s so many of them that they’ve taken over almost every wall of their house.

Then there’s my mom. Oy! There are paper bags full of mail, magazines, and who knows what else all over the house. Things my mom keeps saying she’ll go through one day. As new things come in each day. She’s also saved all sorts of who knows what “to put in scrapbooks for us” to have. All our childhood crafts and clothing. Piles of stuff.

I’m really not looking forward to that day where I will have to go through their stuff after they die. I guess it will all be just a little bit of history repeating….

I could easily be a hoarder. And I probably have been from time to time in a small way. Mentally I have a difficult time letting objects go. The thought “I need to keep this because I could use it later” goes through my brain a lot. I’m not sure where that thought that continually lingers in the back of my brain comes from either. But it’s there, and I deal with it.

I’d say I have gotten better about it than I used to be. Or at least I hope I have. I’m not sure what the Husbear would say about it, but I’m hoping he would agree. Luckily I have him to help remind me of this when I struggle from time to time.

After re-reading the draft of this post over and over, it’s really not my intent to call my parental units out with this. Nor would I consider this “airing dirty laundry”. But for as much as I am unwillingly turning into my parental units, I don’t want this to happen to me.

I guess I should at least be happy they haven’t hoarded animals.

To you, what are some great things about being gay and what are the downsides to being “hetero challenged”?

For me, the only real difference between myself and others who think themselves “hetero” is the fact that I am a human male who is attracted to other adult human males, and acknowledges such in a open manner. Add to that: I have seriously questioned my sexuality in the face of what others would tell me what I have to be.

Maybe that sounds overly simplistic, but sometimes the simplest things are the best.

lick to embiggen… and for the rest of the picture. (there’s no nudity)

If I had to split the upside and the downside of being gay, I find it a harder question to answer, really.

Here’s what I have come up with so far:

Okay. I admit, those are just jokes. (Well, maybe all but the “I know my enemies” entry.) I really don’t have a list of things that are great. To me being gay is just living, as I would imagine anyone does—regardless of their sexual identity. Some days are awesome, and some days are not.

So there you have it. Those are the current downsides as I see them.

What about you? What are some great things about being gay and what are the downsides to being “hetero challenged”?

Reading Alexander’s posts a few months back about his coming out started me thinking about my own journey. [You can read his story here in parts 1, 2, 3, 4, 5 and 6.]

I’ve been piecing this post together since then. “The Way Things Work” seemed like an appropriate title as that is what I was attempting to figure out. Actually, I still am. 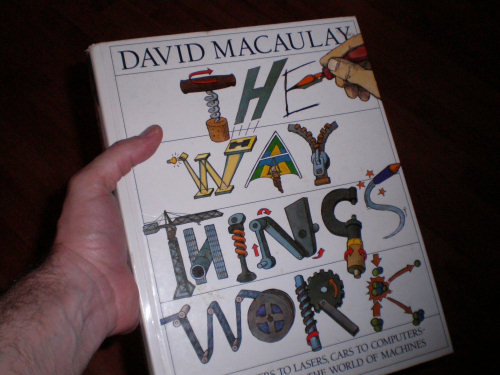 There is no manual for figuring out your sexuality…

People around me who get to know me, or are just curious, tend to ask me—as probably a lot of us get asked—how I could be gay?

I have attempted many times to write my version of events as seen through my eyes. I’ve yet to be able to do that in any coherent manner. So I’m going with what I have.

The recollections of my past are just murky pieces—faint flickers, really—that I cannot seem to piece together in any logical (to me) order. I remember…

…having feelings that I knew were “wrong” according to everything I had been taught my entire life by my family unit and their chosen religion—the Church of Christ. These teachings were reinforced by 8 years in Church-run schools, then 5 years in a Church-run college.

…knowing what I was feeling on the inside contrasted against what I saw going on around me on the outside: dating, girlfriends, sex. None of which I had while in high school or college. All so easy to “explain” away.

Some memories are less flickers and more like explosions. Brilliant points of light in an otherwise dark sky. I remember…

…my mom asking me if I was gay while I was in high school and me telling her “No”.

…the first time someone told me they were gay. While driving home from Arkansas to Florida for a holiday break in college, I was carpooling another student to his home and somewhere along the way he outed himself to me. I fucking freaked out. I don’t think he and I spoke the rest of the way (short of directions) to his house.

…at 23 years old, getting the nerve to actually meet someone “to see how this all worked”. I was scared as hell through dinner. We went back to his house. He put his hand on my knee, then started kissing me. IMMEDIATELY the switch was thrown and I knew exactly where I was supposed to be.

Even though at that moment I knew how I was, there were (and are) still many things I had to work through to know who I was.

As always there is more to this story, but that is going to be another post…. And probably in another three months I’ll have it written.

While I don’t agree with everything they say and sell on their website, this is taken from the latest T-Shirt Hell Newsletter:

If it can be straddled, it’ll get the job done.

When you were twelve you would get a boner because you weren’t properly situated in your chair and your pants were a little tight. Does that mean you like to fuck pants? No – It means pretty much anything will get the job done downstairs and we all care a little too much about what’s fuckable and what isn’t.

While I do think some of us are certain of what gets us hard and what doesn’t, I think there are a vast number of people out there who would (and do) fuck anything they can get their hands—or other body parts—on… or in. 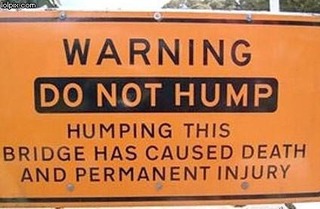 And then there are some who I wish would. Or at least would me.