It is snowing here in Northwest Arkansas. A very rare event for here the last few years. Usually we just get ice storms that cripple the area for weeks. The snow started early this morning and has not let up yet. There’s about 3 inches of snow on all the horizontal surfaces so far. All the schools and most businesses are closed. That’s the way things go in these parts. 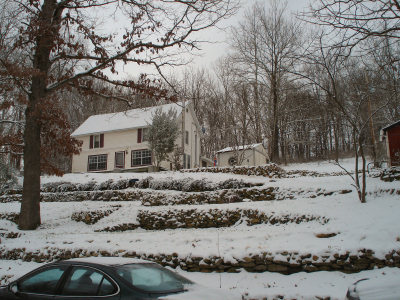 Snow at the house

Driving to the day job was interesting (as it always is, actually). For what reason do people turn stupid when the weather changes? They drive like drunk teenagers leaving prom getting their first road head. I passed two accident scenes in the 10 miles from our house to work. That was just on the way in! When I left work at 1 PM, there were cars in the ditches everywhere. What the hell?

Anyway, I guess I’ll kill the remainder of the day by wandering around the Internet, watching cartoons and maybe some porn—my idea of multitasking.

I am probably not a “normal” person in my GenX age demographic when it comes to methods of communicating with others. Actually, I am fairly certain I am not normal in general, but that is for another post. For communicating I prefer to text from my phone (my awesome MotoQ that I have hacked and tweaked the hell out of), then instant message from my PC, then email LONG before I want to talk on the telephone. I’m sure that says something about my social skills—or lack of them. Or does it? I am still being sociable to the person the message is being sent to, aren’t I? 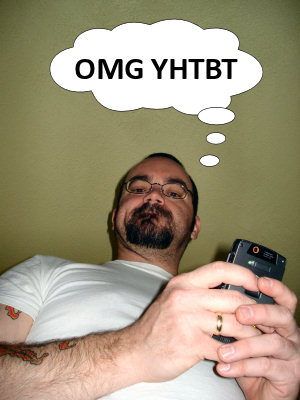 Anyway, what prompted me to write this was a blog post about the true cost of SMS messages. Wow! Cell providers have obviously seen that they can make butt-loads of money off of people from just text message costs alone. And people have no current “alternative” when it comes to text messages—no cell phone equals no text messages equals no means of instant communication.

There has got to be some free alternative out there that can be adopted en masse… somewhere. Over the rainbow. I’m sure. How does that whole communicator thing work in the Star Trek universe? Anyone have ideas of a possible alternative?

I was bored at the tattoo shop the other night… so I did this: 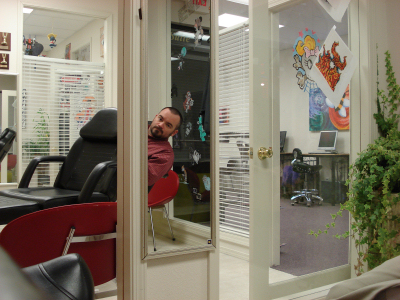 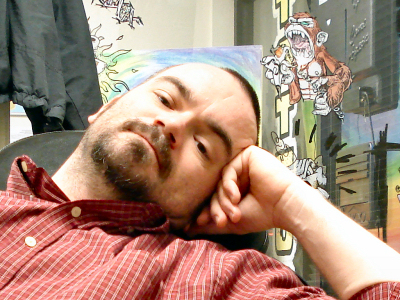 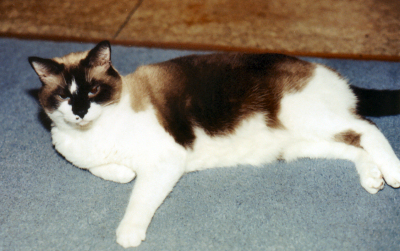 The Husbear called me at the shop tonight with bad news. Hapi is dead. Our oldest cat, the Husbear was given Hapi by his best friend Michelle a few years before he and I met. That puts Hapi at around 14 years old. The Husbear came home from work to find Hapi being, well, eaten… by some puppies we had rescued.

A couple months ago someone had dumped off a couple of puppies out near where we live. We live out in the country and sadly this is a somewhat common happening. We brought the pups home to take care of them since we have 5 acres they can run around on and an older dog to pal around with.

The puppies were a little aggressive to each other from time to time, but had not shown any real aggressive tendencies towards any of our outside cats. They would on occasion play with them but had never hurt any of them. Apparently that changed today.

It looks like I’ll be taking the puppies off to the pound. It would appear no good dead goes unpunished.

I don’t think Hapi’s death has set in with the Husbear… yet.

I started getting the phone calls late Tuesday morning asking if I was okay. After a lot of confusion and then some frantic moments, I found out that several local television stations had reported that the Husbear was killed in a car accident. That is my partner’s name! People were calling me to find out what happened. And I didn’t have a clue as to what was going on. I was about to call home when I get another phone call, and it’s the Husbear.

The Husbear received a few telephone calls from relatives that morning as well, one of them being his mother in tears. Talk about an odd moment. Having to explain to your own mother that you are not dead. He called me to tell me what he had heard.

What a horribly surreal moment….