Now is not the time for this update, Windows… and with no warning either. *grumble*. And I should probably change my photo.

My apologies to anyone who came here looking for me over the last few days and received a “server not found” message.

There was an issues with the DNS entries for my site name that my webhost was finally able to get corrected for me.

I’m back now! Not that I really do anything anymore. But at least I’ll get my email now.

… not that I went anywhere. I was still here physically. But I couldn’t get into my blog.

I upgraded my site to use https instead of plain-old http. And in doing so, I somehow managed to lock myself out of my wordpress database. Meaning I wasn’t able to post directly. But I finally managed to get myself in, and the remainder of the site converted over to using https instead.

Now if I could just get a stable Internet connection at home. Damn you CenturyLink. Day 3…

Is anyone else with an iPhone who reads this little ol’ blog seeing Siri do this this? 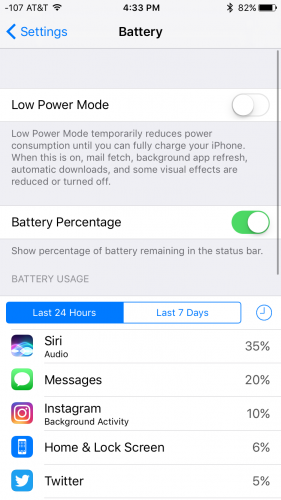 Siri has been draining my battery like my color after hearing the election results. Which weirdly enough is right around the time it started doing it. And it always says “Siri (Audio)” when this happens.

Some Googling has resulted in suggestions, but no one seems to have found a definite cause/correction.

The first was disable “Siri Suggestions”, but I’ve had it off since upgrading months ago: 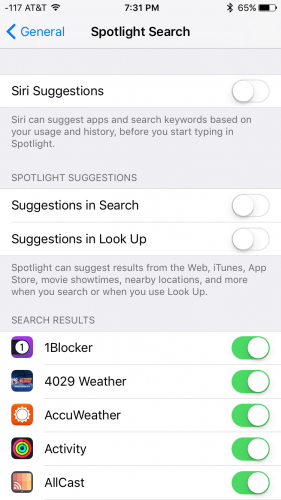 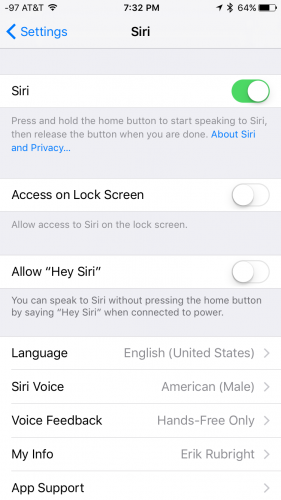 Even though Dictation has it’s own option: 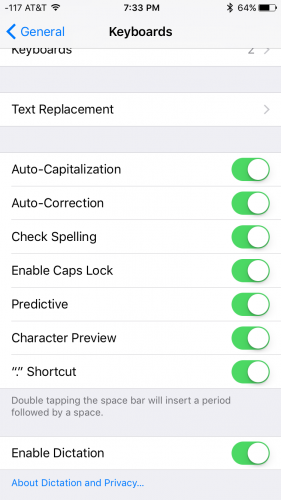 Another suggestion was to switch Siri Feedback from “Always On” to one of the other options. But mine has been like this since the upgrade months ago as well: 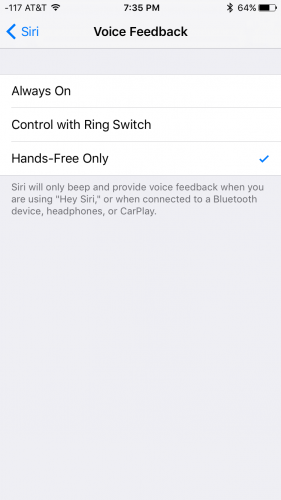 Both a regular reboot and a hard reboot don’t make a difference either.

The other options are to nuke the phone and reload it, but before I do that, I wanted to see if anyone else is experiencing this.

I’ve been ranking my songs in iTunes and on my iPhone using the star rating system for… ages. Most of my playlists involve the use of the stars to sort what I want to hear.

After upgrading to iOS 10, I couldn’t find the ability to modify the rating anywhere aside from Apple’s new thumbs-up or thumbs-down feature, which is not granular enough… for me.

After a bit of Google-sleuthing, I discovered this feature is no longer available in the iOS Music app, with no way to rate a song as it plays on my iDevice. (It can still be accessed via iTunes… for now.) Thanks for yanking an old feature, Apple.

Luckily, some developer out there has created an app that allows me to still do that, as both a widget and in it’s app. It’s called “Music Rating Widget”, and can be found at https://itunes.apple.com/us/app/music-rating-widget/id971955890?mt=8.

I can now still rate the new music I get as I play it, and adjust older ratings as my tastes change.

36.3485008-94.2112654
The 12 of 12 Challenge was created by Chad Darnell and picked up by a number of random bloggers who linked back to him and vice versa. Chad stopped doing the 12 of 12 Challenge in December 2011, but passed the torch to someone who [sadly] hasn’t been keeping up with it. I am giving my shout-out to Blobby of Blobby’s Blog as he is the one who initially inspired me to do the Challenge, and he still does.

This is my 52nd “12 of 12.” A Tuesday. Normally a day off for me, but I somehow managed to jack up my schedule and have been working six days a week the last couple of weeks. And will be for the next few. Ugh.

I’m publishing this post late because our home computer had a hard drive failure, and while I’ve replaced that, I haven’t had time to “be myself” with trying to get the taxes done and working too much.

But here you go. My weak attempt at the 12 this month.

And now on with playing catch-up still…