So, tonight I did something for myself at the tattoo studio. I spent two hours doing this to myself: 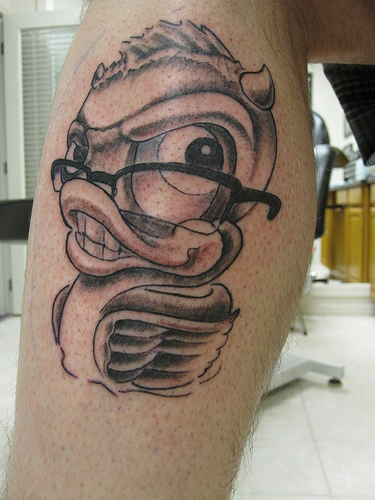 Yes. I said to myself. I’m only a little crazy.

I still have to do the color work on myself as a duck, but I’ll have to wait until the kink in my back and my knee straitens out. I’m just not as bendy as I used to be.

I’ve not always had a thing for rubber duckys, but for the last few years I’ve started to collect them for some odd reason, and clients have brought them to me thinking I collect them. So the ducky seemed appropriate. He’s on the same leg as my DNA helix, so I’m sure eventually I’ll have a sock incorporating the two and other “relics” of my childhood that I will feel the need to tattoo upon myself.

Go ahead, ask me a question. You know you want to. I’ll do my best to answer it. 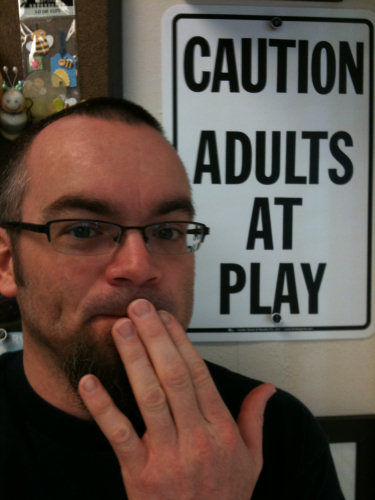 This is not one of my normally light, fluffy, buttery posts.

Some of you will recognize the following quote as one spoken by Tasha Yar from “Star Trek: The Next Generation”, in her holo-will after she was killed during the episode called “Skin of Evil”:

Death is that state where one lives only in the memory of others, which is why it is not an end. No goodbyes—just good memories.

But what happens to those good memories when you’re the one who finds that person dead?

I could talk about the fear of finding your loved one of many years dead when you’re both old and gray.

I’m not talking about that particular fear. At least not today.

What happens when you find a person dead, when that person didn’t die from natural/expected causes but because they took their own life?

What happens to those good memories then?

She had distressing news to relay to me.

A little background. My father owns a plant nursery in Central Florida. My two brothers have followed in my father’s footsteps and work at the nursery. My sister did as well, until her husband started his own, where she now works. Definitely a family affair, sans me. That’s a different story for a different time.]

Back to the story in progress.

Thursday, my two brothers found the foreman after he had hung himself. At the family nursery.

From what I gathered from conversations with each of the three siblings, my brothers acted admirably. And did the same things I would have done to handle the situation.

But now my siblings, especially my brothers, are bouncing around all the thoughts and questions one would expect.

And they all start with “Why”. And both brothers have said in separate conversations, “I just wish i hadn’t seen it personally.”

There was a note, but it’s contents are unknown. The investigators haven’t divulged it’s content. Maybe when and if that happens, then some questions *might* be answered.

All I could do was tell them I’m here if they need someone to talk with.

But that still won’t erase that image from their minds, nor rid the feelings my brothers have surrounding what happened.

Emily Robison and Martie Maguire from the Dixie Chicks will be releasing new music this spring under the name Court Yard Hounds.

I love the Dixie Chicks, so I’m curious to see how the sisters do sans Natalie Maines. (I know, technically they were together BEFORE Natalie was part of the Chicks, back when they had a different lead singer, but still.)

The girls are definitely sticking to their guns with writing music covering topical and taboo subjects. Here’s one of the songs off the album, called “Ain’t No Son”.

“Ain’t No Son” by the Court Yard Hounds

Aren’t you a sight to see
Yeah, you’re a sight to see
What you call freedom makes you look like a freak
You must get around
Cause it sure got around
Don’t you know that I can’t show my face in this town
Don’t think I’m gonna get you up off of me
When you’re the one who turned your back on me
Stranger, stranger on the wall
When the neighbors come to call
I just don’t know what to say
So I’ll put you away
This time I won’t leave a trace
I’ll fill up the empty space
When I put you, I put you away
I put you away

Been there. Maybe I should write about that someday.

Oh, and I preordered their CD. Based off the music on their website and their performance at SXSW 2010, I’ll love it.

UPDATE: I find it curious that they went with Sony Music Entertainment, especially after the long court battle they had as the Dixie Chicks with Sony. I guess there’s only so many record companies out there these days….

I was tattooing on a 17-year old client. (Yes, 17.) She had a band-aid on her arm. She asks her mother to take it off of her, which she does, with a yank. The girl says “Oww!” The mother says “You’re getting a tattoo, and that hurt?”

Pain is both relative, and caused by relatives.

For those of us in relationships that aren’t recognized, a helpful tip on how to fill out the 2010 Census from George Takei and Brad Altman: