I sometimes wonder: when someone I know shows up in a dream, if I am showing up in their dream from their point of view? Which could be fairly awkward considering some of the dreams I have…

I haven’t been able to get this song out of my noggin today. I actually remember it playing in a most bizarre dream I had last night. The dream involved tornadoes. I’ve been having a lot of dreams with tornadoes as of late. I’m not sure what that’s about.

Anyway. Back to the song.

While I now know this song was originally written by the Beatles, I will forever think of this song as a Siouxsie and the Banshees song. Because her/their version is so much better.

(YouTube link if you do not see the above embedded video .)

And how did I forget that Robert Smith of The Cure was at one time a member of the band?

This is not one of my normally light, fluffy, buttery posts.

Some of you will recognize the following quote as one spoken by Tasha Yar from “Star Trek: The Next Generation”, in her holo-will after she was killed during the episode called “Skin of Evil”:

Death is that state where one lives only in the memory of others, which is why it is not an end. No goodbyes—just good memories.

But what happens to those good memories when you’re the one who finds that person dead?

I could talk about the fear of finding your loved one of many years dead when you’re both old and gray.

I’m not talking about that particular fear. At least not today.

What happens when you find a person dead, when that person didn’t die from natural/expected causes but because they took their own life?

What happens to those good memories then?

She had distressing news to relay to me.

A little background. My father owns a plant nursery in Central Florida. My two brothers have followed in my father’s footsteps and work at the nursery. My sister did as well, until her husband started his own, where she now works. Definitely a family affair, sans me. That’s a different story for a different time.]

Back to the story in progress.

Thursday, my two brothers found the foreman after he had hung himself. At the family nursery.

From what I gathered from conversations with each of the three siblings, my brothers acted admirably. And did the same things I would have done to handle the situation.

But now my siblings, especially my brothers, are bouncing around all the thoughts and questions one would expect.

And they all start with “Why”. And both brothers have said in separate conversations, “I just wish i hadn’t seen it personally.”

There was a note, but it’s contents are unknown. The investigators haven’t divulged it’s content. Maybe when and if that happens, then some questions *might* be answered.

All I could do was tell them I’m here if they need someone to talk with.

But that still won’t erase that image from their minds, nor rid the feelings my brothers have surrounding what happened.

I awoke at 1:55 AM, being torn from my sleep by someone screaming out in pain.

I checked the Husbear; it wasn’t him.

It wasn’t someone outside, as the dogs were all calm.

I’m a little unnerved at this point. 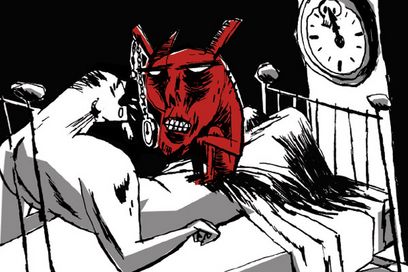 Does anyone else dream in “cartoon mode”?

Not sure how the nightmare got to this point, but this is what I remember…

there was a group of us in an elevator.
the elevator cage was made of short-walled Plexiglas for the most part, so it was transparent.
we were working in a warehouse of some kind.
that the elevator moved on a both horizontal and vertical path.
I was showing the others how to do something.
I don’t remember what or why.
for some reason, the group of us got out of the lift to let another group use it.
while we were getting out, someone attached a cable to the lift.
to brace or steady it?
we were all out, and the next group was starting to get in.
the cable pulled tight all of a sudden.
the cage was then yanked outside through the warehouse wall.
with one occupant in it.
by a parachute or flag attached to the cable?
the cage was being tossed around with the occupant erratically.
like a broken kite with a long tail.
smashing into the ground then zipping up into the air.
over and over.
I don’t know who the occupant was specifically—no one that I recognize.
we could see him, the occupant, as the wind blew it around us.
sometimes it was up close and then other times it was far away.
when it was up close, we could see that he was limp, being tossed about in the cage.
assumed dead.
everyone was watching outside, in horror, for a period of time.
i remember it getting dusk out during this “show”.
on one of the passes, the occupant was dislodged from the cage onto the building above us.
the force of his ejection caused him to come bouncing down to the ground where we were.
with a squishy, thud sound.
he looked extremely broken.
everyone—myself included—ran away from the scene trying to not be ill.
as I looked back, it appeared he was alive somehow and he was trying to move.
we were running back to him, all of us freaking out.

That’s when my alarm clock went off.

I can still see it vividly in my head. More than I can express in words. And I’m still feeling a little panicky as I write this.

Today should be fun….